USDCHF Needs Boost from Buyers to Switch the Outlook to Bullish

USDCHF is in the process to post the fifth straight day of gains, following the pullback off the 0.9367 support level. The pair jumped above the 200-day simple moving average (SMA) again and is trying to have a closing day beyond the short-term declining trend line from June 15. Moreover, there is another tentative line a bit higher, so a break above it should be a confirmation of a bullish correction move.

In trend indicators, the MACD oscillator is holding above its trigger line in the negative territory, while the stochastic is standing in the overbought region, both suggesting that the next move would be to the upside rather to the downside.

Should USDCHF make another run higher, it’s likely to meet resistance at the immediate 40-day SMA at 0.9610 as this level has strongly capped prices over the last month. A successful climb above this key resistance area would open the way for the 0.9650 barrier, which coincides with the next descending trend line. A penetration of this line too, would endorse the positive momentum, driving the market until the 0.9885 high.

If prices turn lower, the 20-day SMA at 0.9530 is the nearest support that could halt steeper declines. A potentially more important support, though, is the 200-day SMA at 0.9440. If breached, it would shift the focus to the downside and prices would slip towards 0.9367 before creating a lower low near 0.9195.

Overall, USDCHF would need to make a sustained climb above 0.9650 in order for the outlook to become convincingly bullish. 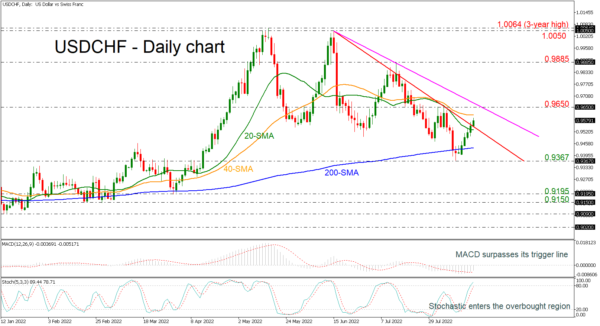