The US dollar has quite expectedly accelerated its rise. EURUSD is trading less than 50 pips from parity, which it managed to defend in mid-July, having retreated from 20-year lows. GBPUSD has also quickly returned to July lows, losing more than 2.5% since the beginning of the week. 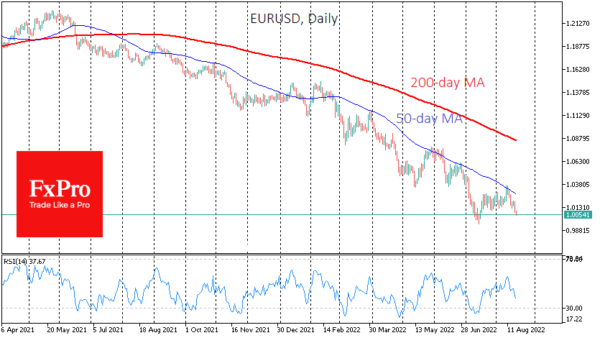 A similar dollar march can be seen in the other most popular currency pairs this week. The dollar bulls didn’t let the retracement pull back after the yearlong rally to new levels. Both macro data and verbal interventions by Fed officials helped this to a large extent.

A report of half-million new jobs in July was combined with a slowdown in inflation in recent days. Such a mix took away some of the fear of an immediate economic deterioration. Still, it also somewhat bolstered faith in the dollar’s purchasing power, which is no longer being eaten up by inflation as much.

That said, FOMC members have not stopped assuring markets that they should and (even more importantly) are willing to do more to curb inflation. It is also worth taking seriously the assurances that the Fed should avoid a surge in inflation expectations, which should be taken as an attitude not to cut rates for quite some time.

During the summer, the dollar bulls had time to refill their guns but did not allow the technical pattern of the dollar growth to be broken.

So EURUSD and GBPUSD got bogged down in the resistance of the 50-day moving average. Separately, EURUSD lost corrective momentum on the approach to 1.0370, where the lows of May and June 2022, December 2016 and January 2017 are concentrated.

Similarly, in GBPUSD, the former support became resistance, and the recovery has lost momentum at 76.4% of the February-July decline amplitude. A similar Fibonacci retracement works in USDJPY. 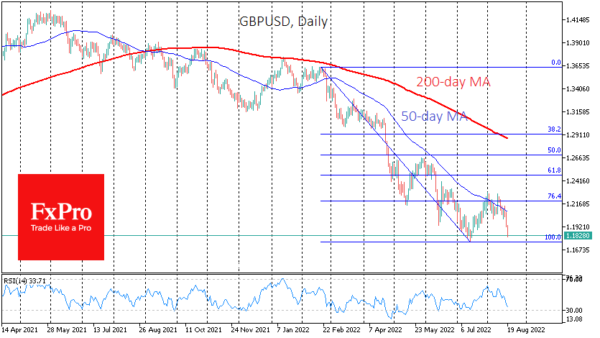 The USDCHF and AUDUSD were proving their commitment to their multi-month dollar trends by pulling back from their 200-day averages.

Cautious bulls might wait for the USD index to update the highs near 108.50. But we believe that it is a matter of the next few days. As capitals return from the summer holidays in the last few days, we see a clear upward trend forming for the USD. The rebound in the markets during the summer months now looks not like buying while everyone is afraid but a temporary rebalancing of portfolios and an opportunity for the big players to gain liquidity before a new wave of declines.

If the currency market maintains its momentum, EURUSD will enter September below parity, which could cause even more emotional sell-offs and pull the pair further down. The same is expected from GBPUSD, where a consolidation below 1.18 looks to be in the next few days.

In previous years, a 20% rise in the dollar for 12 months would draw the attention of the US Treasury or the Fed and try to stop the unilateral appreciation of the currency. But a rising dollar is now suppressing commodity prices and imports, bringing the return of inflation closer to normal, doing some of the work instead of the Fed.

Potentially, a path opens up for the dollar in the 2000-2002 highs area, near 120 on the DXY, which is about 10% more from current levels. A wilder scenario with a repeat of the 1980-1985 mega-rally is rejected for the time being because the authorities will try to prevent what they fought against then: the destruction of the US economy and massive defaults by emerging markets due to the excessive strength of the USD. 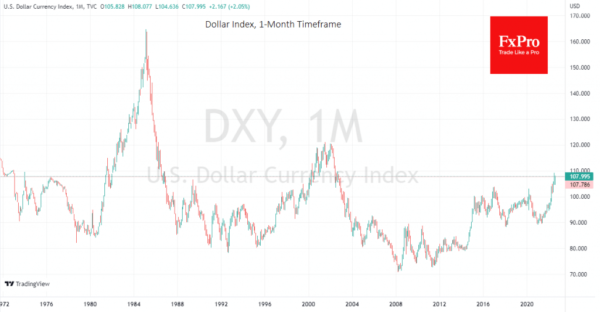