Near-term ranges are narrowing, and trading is quieter, as markets await the verdict from the Fed’s two-day policy meeting that ends tomorrow.

The US central bank has not much space to maneuver, as inflation remains high and over four times above the 2% target and Fed’s main task is to restore price stability, with main tool being tightening its monetary policy.

In its September’s meeting, the Fed is expected to raise rates by another 75 basis points, with possibility of a massive 1% hike, being also on the table.

Aggressive central bank’s stance continues to lift the dollar, also strongly supported by safe-haven buying over growing economic and geopolitical concerns, as many large economies are on the way to recession.

Hawkish Fed in line with expectations is likely to be supportive for dollar, due to widening divergence of the monetary policies of Fed and other central banks, while Fed’s decision above expectations would strongly accelerate greenback’s rally.

Sustained break of cracked psychological 110 barrier would open way towards Fibo projections at 111.12 and 112.85 initially, but stronger rise cannot be ruled out on Fed’s surprise. 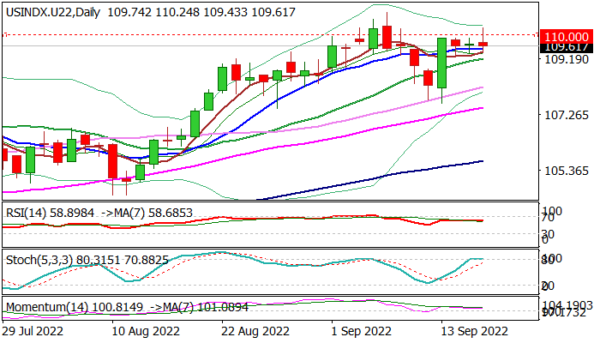