AUDUSD was trimming Wednesday’s quick bounce from the 29-month low of 0.6362 during Thursday’s early European trading hours, but the completed doji candlestick pattern continued to feed hopes for an upside reversal.

Given the price’s continuous contact with the lower Bollinger band over the past month, the odds are favoring the bulls. The RSI and the stochastics are adding to this optimism as the indicators are trying to exit the oversold territory.

Nevertheless, buyers could hold up until the price successfully claims the nearby resistance of 0.6520. If that proves to be the case, the pair might fly directly towards July’s trough of 0.6680, where the 20-day simple moving average (SMA) happens to be. Slightly higher, the 0.6745 region had been frequently tested during 2019 and could be the key for an advance towards the 0.6840-0.6900 zone. Note that the 50-day SMA, as well as the tentative descending trendline from 0.7660, are positioned within this region.

If the bearish scenario plays out, with the price closing below 0.6400, the next pivot point could develop around 0.6250, taken from April 21 2020. Should sellers persist, the downtrend could stretch towards the 0.6185 barrier.

In short, despite the clear downtrend in AUDUSD, the technical picture is increasing the stakes for some stabilization in the market. Perhaps a decisive close above 0.6520 could help the pair to gain some extra ground. 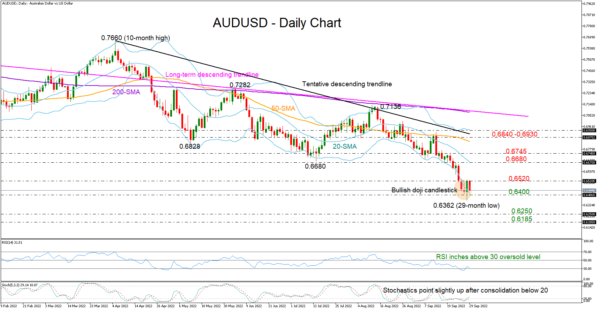