WTI oil futures (November delivery) have been experiencing a prolonged decline since mid-June when the price failed to surpass the 121.00 mark.  Although the commodity has been recording consecutive fresh lows in the last few daily sessions, it managed to recoup some losses after hitting an 8-month low.

The short-term oscillators are depicting that bearish forces remain in control despite the recent upside bounce. Specifically, the MACD remains below both zero and its red signal line, the RSI is flatlining beneath the 50-neutral threshold.

Should the negative momentum intensify further, price declines could cease at the eight-month low of 76.25. Dipping beneath that region, the bears could target the December 2021 resistance zone of 73.00 before the December low of 66.10 comes under examination. Even lower, the November bottom of 62.25 may provide downside protection.

On the flipside, bullish actions might propel the price towards the recent support zone of 85.40, which could now act as resistance. Conquering this barricade, the price may ascend towards 89.60 or higher to challenge the August peak of 97.70. A break above the latter could open the door for the 102.00 region.

Overall, despite the minor upside correction, WTI oil futures are likely to lose more ground as the commodity appears to be facing persistent downside pressure. For that bearish tone to reverse, the price needs to jump above the 97.80 ceiling. 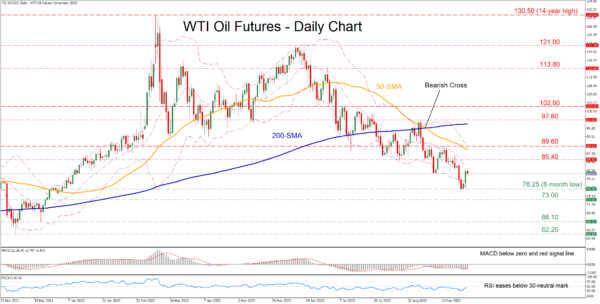