GBPJPY has experienced some large moves in the short term, with the price losing around 10% before it recovers back above the 160.00 mark. Moreover, the technical picture is currently endorsing the resumption of the rebound as the pair has forcefully crossed above the ascending 200-day simple moving average (SMA).

The momentum indicators suggest that near-term risks are tilted to the upside. Specifically, the stochastic oscillator is ascending near the 80-overbought region, while the RSI has rebounded from the oversold zone, currently touching the 50-neutral threshold.

If buying pressures persist, the pair could initially challenge the 50-day SMA, currently at 162.30. Surpassing this zone, the bulls might aim for the recent resistance region of 164.40 before the September peak of 167.50 appears on the radar. A break above the latter may bring the June high of 167.83 under examination.

To the downside, should the price decline below its 200-day SMA, the recent low of 159.10 could act as the first line of defense. Sliding beneath that floor, the pair might descend towards 158.00, which has acted both as support and resistance during 2022. Failing to halt there, the May low of 155.58 could then provide significant downside protection.

Overall, GBPJPY has been exhibiting huge volatility in the short term, with the pair managing to erase a huge chunk of its steep decline within four daily sessions. For the recovery to continue, the pair must decisively cross above its 50-day SMA. 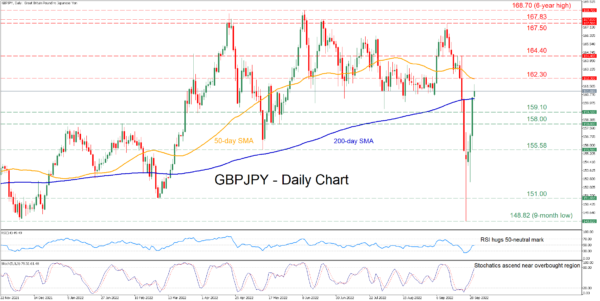