AUDJPY tumbled yesterday, after hitting resistance at the crossroads of the 94.50 level and the upper bound of a rising wedge formation that had been containing the price action since September 27. The slide resulted in the break below the lower end of the pattern but thereafter, the pair began oscillating slightly above 92.65. This paints a negative picture, but a break below 92.65 may be needed for more declines to materialize.

Both the RSI and the MACD are lying within their bearish territories, with the latter also running below its trigger line. That said, the RSI has turned up again, which implies that another small recovery may be on the cards before the bears steal all the bulls’ swords, perhaps to test the lower end of the wedge as a resistance this time.

A break below 92.65 could initially target the low of September 28 at 92.12, the break of which could carry larger bearish implications, as the next territory to play the role of a support may be all the way down to 90.50, marked by the low of August 2.

On the upside, a break above the high of October 4 at 94.70 could signal a short-term bullish reversal as the pair would be above all the plotted exponential moving averages (EMAs). This could encourage buyers to take the action up to the inside swing low of September 16 at 95.50, where another break could extend the advance towards the high of the day before at 97.13.

To sum up, AUDJPY exited a rising wedge formation yesterday, which is a bearish sign, but for the picture to get uglier, the pair may still need to break below a couple of imminent support zones. 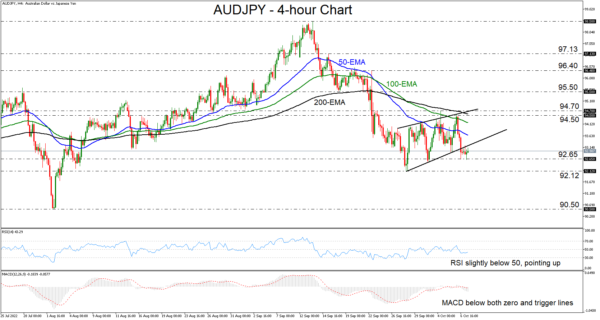 Gold Regains Traction But Near-term Direction Will Depend on Signals of...