Action Forex
HomeContributorsTechnical AnalysisECB Policy Meeting: Is More than a Rate Hike on the Table?

ECB Policy Meeting: Is More than a Rate Hike on the Table?

With inflation five times its target, the ECB has certainly more work to do to achieve its price stability goal. On Thursday, the central bank is largely expected to repeat September’s triple rate hike even though a recession looms ahead. Any comments on the terminal rate level and plans for quantitative tightening could make the meeting relatively special, although such discussions might be premature at the moment.

Financial conditions are not bright in the euro area. The European Systemic Risk board, which is responsible for tracking threats to the financial system, has warned over increased macro vulnerabilities in the region even before the UK’s political failure spooked financial markets. Particularly, the body advised financial institutions to enhance their provision practices and capital planning as recent geopolitical developments and tightening financial conditions threaten renewed balance sheet stress for non-financial corporations and households. 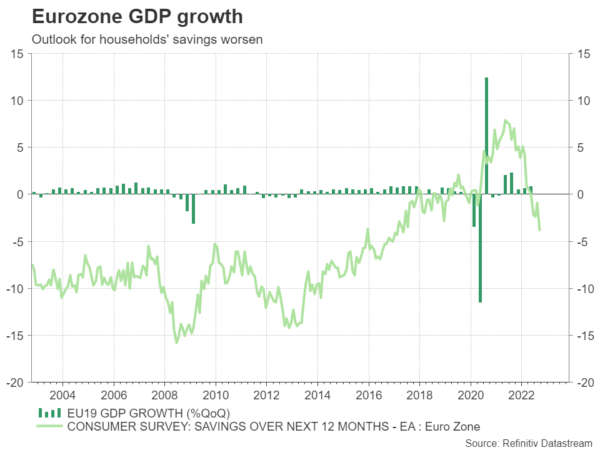 Two more severe systemic risks were mentioned regarding large margin calls for investors in the event of sharp falls in asset prices, and a drop in asset quality and profitability outlook, while elevated risks in the real estate sector is also something that cannot be ignored.

Another triple rate hike due this week

The ECB chief Christine Lagarde acknowledged the above headwinds but refrained from easing her hawkish tone as inflation is expected to remain the number one problem for longer. The sum of recent public speeches delivered by ECB board members further convinced traders that rate announcements will be more pronounced by the end of the year, with futures markets fully pricing in a second 75 bps rate increase this week. 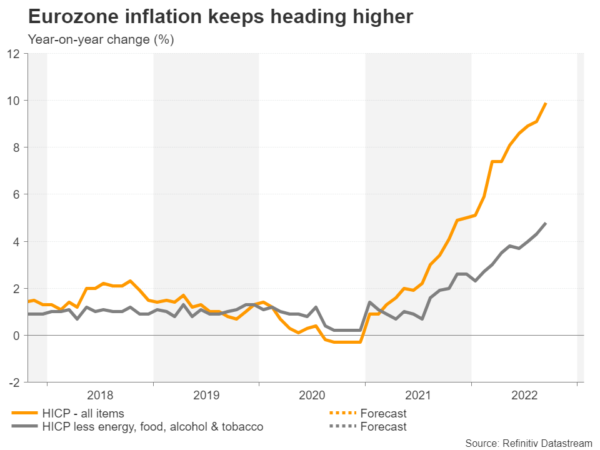 On the other hand, there was a group of dovish policymakers who recently highlighted the cost of maintaining such an aggressive policy tightening. That immediately raised questions about whether the central bank will take smaller rate steps once it reaches the level that neither stimulates nor restrains the economy. Currently, investors anticipate two 50 bps rate hikes in the next two meetings before the pace of increases slows to 25 bps in March and May 2023 to reach the terminal rate at 2.75%-3.0%.

Yet, the communication might not be clear on where the neutral rate level could be and whether the central bank will terminate its rate hike cycle at that point, as unlike inflation in the US, eurozone inflation has barely shown any signs of abating so far. Note that new updates on economic projections are scheduled for the next meeting in December. Therefore, that might be a story for another day.

The ECB may also avoid providing any guidance on quantitative tightening, although internal discussions seem to have started already. Lagarde said that a balance sheet reduction may not happen until interest rates reach the neutral level. Of course, making plans in advance is helpful, though leaking important information when bond markets are melting and the spread between Italian and German yields remains wide could further scare investors and pressure markets in high-debt member states such as Italy. Note that many policymakers expect the central bank to carefully phase out reinvestments from matured bonds bought under the regular APP asset purchase program in spring 2023.

Investors will also look for any changes in the terms of cheap targeted longer-term refinancing operations (TLTRO) loans. That could be a convenient way to restrain liquidity by speeding up repayments from banks. 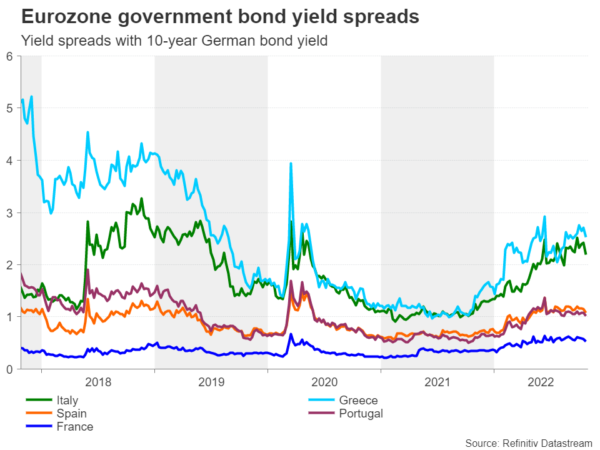 Turning to FX markets, the rate announcement itself may not create any exciting bullish reaction in the euro, as it’s already fully priced in and backed by policymakers. Hence, the focus will fall elsewhere and particularly on the extra details that the central bank might provide regarding liquidity reduction through other channels, such as quantitative tightening. If the central bank judges economic conditions might be better-than-expected to allow similar bold rate increases in the coming months and a balance sheet reduction at the start of next year, euro/dollar could stretch up to test the 1.0119-1.0197 resistance region. A break above the August high of 1.0368 could add more credence to the bullish wave.

Otherwise, heightened concerns over the coming quarters and increased speculation that the neutral rate level could be reached earlier next year, but QT may come with some delay and could squeeze euro/dollar back into the bearish channel. A break below the 50-day simple moving average (SMA) and the 0.9860 key level could open the door for the 0.9700 support region.