The structure of the GBPUSD currency suggests the formation of a global corrective trend – a triple zigzag w-x-y-x-z. On the 1H timeframe, we see the final actionary wave z of the cycle degree.

The wave z most likely takes the form of a primary triple zigzag Ⓦ-Ⓧ-Ⓨ-Ⓧ-Ⓩ. Perhaps at the beginning of August of this year, the bullish price movement ended within the small primary intervening wave Ⓧ, it took the form of an intermediate zigzag (A)-(B)-(C).

After that, the bearish trend continued to develop in the primary wave Ⓩ, which can complete its intermediate double zigzag pattern (W)-(X)-(Y) near 1.030.

At that level, wave Ⓩ will be at the 100% Fibonacci extension of previous actionary wave Ⓨ. 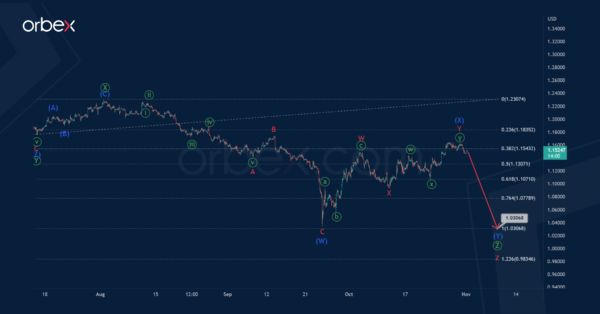 In the second variant, it is assumed that the cycle wave z could be fully completed, it has the form of a primary triple zigzag, as assumed above.

Thus, in the last section of the chart, we see that the bulls have started to move the price into a new trend.

Perhaps the formation of the primary double zigzag Ⓦ-Ⓧ-Ⓨ occurs, where the first two parts have already been formed. The last zigzag wave Ⓨ, consisting of intermediate sub-waves (A)-(B)-(C), is currently under development.

The end of the intermediate impulse wave (C) is possible near the maximum of 1.227, which was marked by the sub-wave (X). 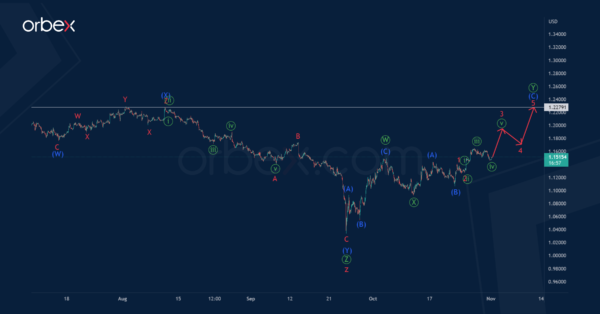