GBPUSD Declines from 5-Month High, But Outlook is Still Bullish

GBPUSD retreated from the fresh five-month high of 1.2343 that was posted on Monday, returning back near the previous support at 1.2160 around the 200-day simple moving average (SMA). In the short-term the bias turned bullish, and more increases may switch the broader outlook to positive as well.

From a technical perspective, the MACD oscillator is still gaining momentum above its trigger and zero lines, while the RSI is holding above the neutral threshold of 50 but it seems to lose some steam. The 20- and 40-day SMAs are sloping upwards confirming the recent move.

In case the pair changes its short-term direction to the downside, the bears will probably challenge the 200-day SMA at 1.2115. A break lower, could last until the 20-day SMA, which stands slightly above the 1.1900 mark. Further down, the area around the near-term uptrend line and the 1.1750 barrier could be another potential obstacle for downward movements. Any moves beneath the diagonal line may endorse the previous bearish tendency.

Alternatively, additional advances may drive the price towards the 1.2300 psychological level and yesterday’s peak at 1.2343. Above the latter, the 1.2410 resistance, taken from the high on June 16 could be another level in focus before resting near the 1.2670 obstacle.

Turning to the medium-term picture, the pair switched to positive mode after the rally above the 200-day SMA. Any moves beneath the SMAs and the uptrend line may open the door for the bears to take the upper hand again. 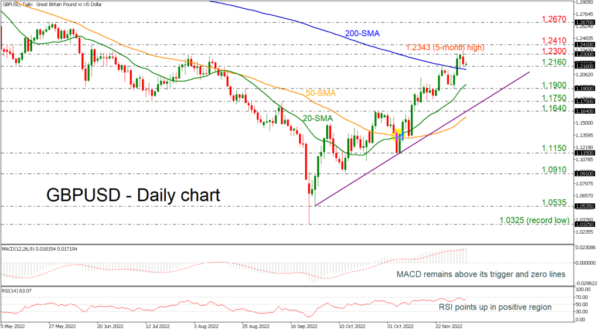