The dollar index is holding firm tone in early Tuesday, following 0.8% advance on Monday (the biggest one-day rally since Oct 27.

Better than expected US data on Monday (services PMI, Factory orders) improved the sentiment and lifted the greenback, as signals that the economy remains robust despite strong rise in borrowing cost, counter recession worries.

The US central bank is expected to raise interest rates by 50 basis points to 4.25%/4.5% range in the policy meeting next week, with terminal rate seen just above 5% and expected to be reached in May.

On the other hand, the risk sentiment is expected to be hurt by the impact of the latest decision of the EU to cap prices of Russian oil, which would start to hit energy prices in the Europe soon.

Fresh bulls face strong barrier provided by 200DMA (105.53) which capped the cation on last Fri / Mon, after being broken last Thursday and reverted to resistance.

In addition, converging falling 10 DMA and 200DMA are on track to form a death-cross, which would further strengthen resistance. 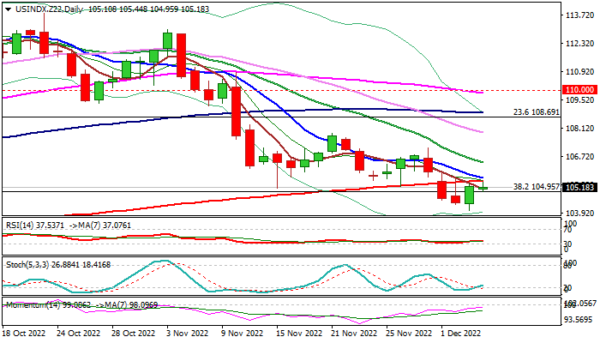