Action Forex
HomeContributorsTechnical AnalysisAUD/USD: Are We Going for a Bearish Trend?

AUD/USD: Are We Going for a Bearish Trend?

Half a month ago we were talking about AUDUSD. Most likely, the currency forms a bearish triple zigzag Ⓦ-Ⓧ-Ⓨ-Ⓧ-Ⓩ, where the primary wave Ⓩ is a simple zigzag (A)-(B)-(C).

At the moment, an impulse wave (C) is being formed, which consists of minor sub-waves 1-2-3-4-5. Minor wave 3 consists of five minute sub-waves.

Most likely, the development of the minor corrective wave 4 in the form of a minute double zigzag was completed not so long ago. Thus, the market may continue to move down in the impulse wave 5.

The currency is expected to decline to the previous low of 0.617, marked by the impulse 3. 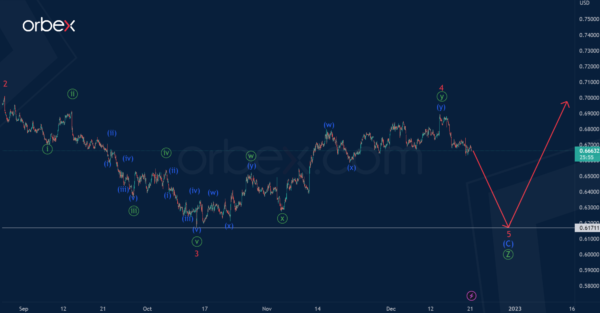 However, corrective wave 4 may not have been fully completed, and most likely it will have a triple zigzag structure.

Bulls could build only four parts of correction 4, that is, we can see fully formed sub-waves ⓦ-ⓧ-ⓨ-ⓧ, and the sub-wave ⓩ is still being built.

In the near future, the market may grow to 0.689. At that level, corrective wave 4 will be at 76.4% along the Fibonacci lines of previous bearish impulse 3. Then, after the full completion of wave 4, we can expect a decline in the minor wave 5. 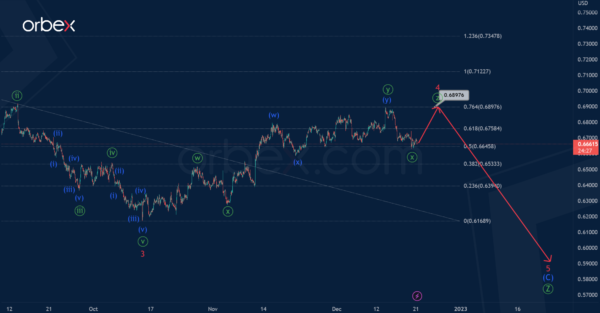