Markets will slowly begin to return to normal in the first trading week of 2023, with a number of top-tier releases on the way to liven things up after the holiday lull. The latest US jobs report will be headlining the economic agenda, while the minutes of the December FOMC meeting is expected to attract more attention than usual given the absence of Fed speakers since the event. Flash inflation readings out of the Eurozone and Canadian employment figures will be the other highlights.

Most markets will be closed on Monday for the New Year holiday so it will be a slow start to the week. But there will be some Chinese PMI numbers out of China on Saturday greeting the few traders that will be at their desks on Monday. China has been gradually moving away from zero-Covid policy and this week ditched its last remaining major restriction by ending the need for inbound travellers to quarantine. But the country is currently battling a surge in infections, hence, it may be a while for the impact of looser Covid curbs to be felt.

The government’s official manufacturing gauge is forecast to have stayed unchanged in December at 48.0, while the Caixin/S&P Global equivalent PMI is expected to have dropped from 49.4 to 48.8. 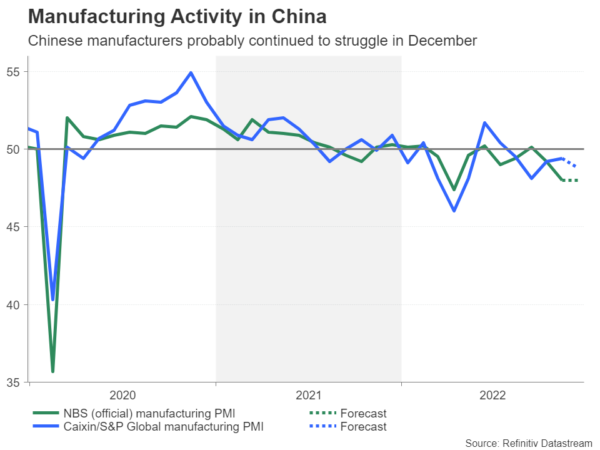 Equity markets could slide should the PMIs point to anything too worrying and the China-sensitive Australian dollar could begin the new year on the backfoot. Though, any setback is likely to be temporary as investors remain optimistic that the world’s second largest economy will bounce back at some point in 2023.

Waiting for the elusive jobs slowdown

Despite the Fed hiking rates by a cumulative 425 basis points (bps) in 2022, America’s labour market has breezed through this tightening cycle, much to the frustration of policymakers. Other parts of the economy, such as housing, are clearly cracking, and even consumer spending hit a soft patch in November. So how much longer can the tight labour market hold out?

After several high profile announcements of big layoffs in recent months, the unemployment rate has ticked up only marginally to 3.7%, while nonfarm payrolls have been rising at a pace of between 250k and 300k since September. Forecasts for the payrolls change have been stuck at 200k and it’s no different for the December report. 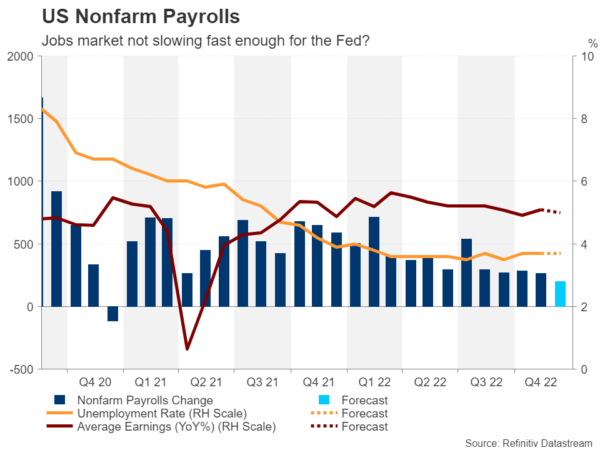 Following Fed Chair Powell’s hawkish pushback in December, investors are likely to be sensitive to continued strength in the jobs data and they will also be paying attention to average hourly earnings, which accelerated to 5.1% year-on-year in November.

Should Friday’s NFP report beat expectations again, there could be some ‘relief’ for the markets from the ISM manufacturing and non-manufacturing PMIs due on Wednesday and Friday, respectively. Both are expected to print lower in December, with the former sinking deeper below 50. Other data will include the JOLTS job openings (Wednesday), the ADP employment report (Thursday) and factory orders (Friday).

Can hawkish minutes boost the dollar?

With the US dollar unable to gain much lately from upbeat indicators as they only heighten fears that the Fed will respond by overtightening, pushing the economy into a steeper recession, it may be a lose-lose situation for the currency next week and it’s best hope could be the December FOMC minutes due Wednesday.

Fed speakers have been mostly silent since the last meeting so the minutes might offer some new insight into how confident policymakers are about inflation coming down substantially over the next year as well as how worried they are about triggering a painful recession. If the minutes shrug off growth concerns, the dollar might be able to better withstand any data-driven selloff.

North of the border, Canada will also be reporting employment numbers on Friday. Canada’s labour market likely lost a bit of steam in December and is expected to have added just 7.5k jobs versus 10.1k in the prior month. The jobless rate is projected to tick up slightly to 5.2%, but on the whole, it’s a tight market and wage growth has been running above 5% since June. 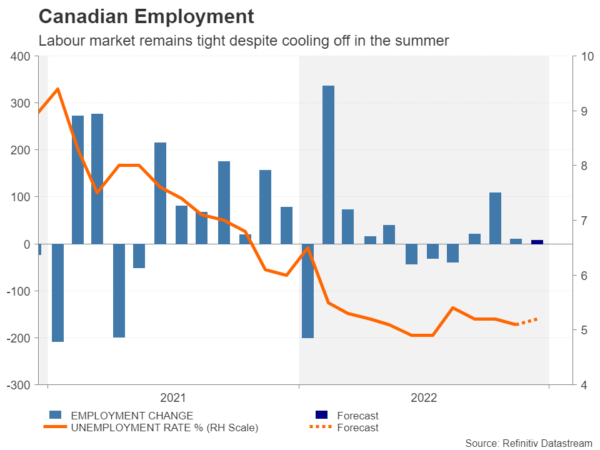 Nevertheless, policymakers at the Bank of Canada are increasingly of the opinion that they’ve already done enough in terms of policy tightening and the decision in January whether to hike or keep rates unchanged will probably be a coin toss. Expectations that the BoC will be the first to pause its rate hiking campaign has been quite damaging for the local dollar. Having outperformed in the earlier part of 2022, the loonie is faring worst than its aussie and kiwi counterparts as the year wraps up.

However, the currency could be in line for a small boost should the job figures impress and they don’t get outshined by the US ones.

Eurozone inflation: has it peaked?

European markets will be getting into full swing straight after the New Year celebrations, with a fairly busy calendar for the week. The flash inflation estimates for December at the end of the week will be the focal point, but investors might be drawn to some of the other releases as well.

The final PMI readings for manufacturing are out on Monday and the services PMIs will follow on Tuesday. Euro area producer prices are due on Thursday and on Friday, November retail sales and the December economic sentiment indicator should help shed additional light on the health of the Eurozone economy. German data will be important too, comprising November trade figures on Thursday and industrial orders on Friday.

After the recent comments from the ECB’s Klaas Knot, who suggested that the Bank is only at the halfway point with its rate increases, Friday’s inflation numbers might not stir up a huge reaction for the euro, but they are likely to provide some relief, nonetheless. 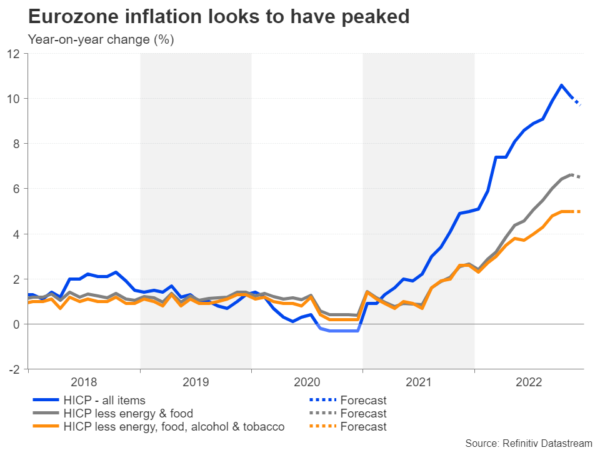 The harmonized index of consumer prices (HICP) is expected to moderate on an annual basis, easing from 10.1% to 9.7% in December. If confirmed, this would raise hopes that inflation in the euro area has peaked, although the underlying measures are not anticipated to be as encouraging. HICP excluding food and energy is forecast to drop by just 0.1 percentage point to 6.5% and to stay unchanged at 5.0% when excluding alcohol and tobacco prices too.

The single currency has been trading within a very narrow range over the last two weeks, so a breakout seems imminent. The question is, will the euro finally be able to conquer the $1.07 handle after hovering beneath the level for so long, or will the dollar make a comeback, pushing the pair below $1.05?