Action Forex
HomeContributorsTechnical AnalysisUSDJPY Flounders as the Near Year Kicks in

USDJPY Flounders as the Near Year Kicks in

USDJPY could not gain fresh impetus on the first trading day of the year, retaining a muted tone near December’s four-month low of 133.55.

The pair suffered its worst monthly loss since 2016 in December, with the decline worsening significantly following the rejection from the key resistance trendline that connects all the highs from the peak of 151.93. Failure to reach that trendline last week increased the odds for more downside in the four-hour timeframe.

The negative trajectory in the momentum indicators is also dashing hopes for a meaningful rally, though with the RSI and the stochastics hovering near support levels within the oversold territory, an upside correction cannot be excluded.

In case the price crawls back above 131.70, the 20- and 50-period simple moving averages (SMAs) may attempt to pause the bullish action around 133.00. Note that the 50% Fibonacci is within a breathing distance at 133.30, while the crucial descending trendline seen higher at 134.45 will remain a major threat as long as it stays solid. Should the bulls crash that wall, the price could speed up to 136.00.

All in all, the short-term outlook for USDJPY does not look bright at the moment, warning of more declines in the coming sessions. Specifically, a clear step below 130.50 is expected to trigger the next selling phase. 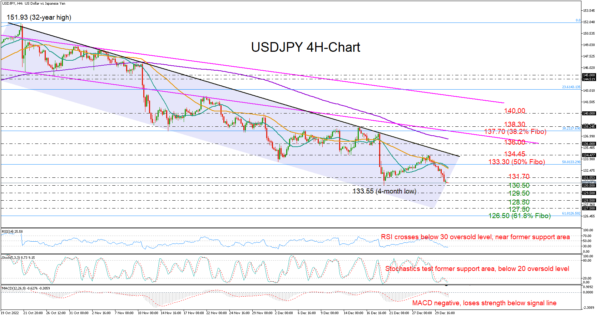