USDJPY had experienced a significant uptrend in the past year, climbing to a 32-year high of 151.94 in mid-October. However, the pair has been experiencing a prolonged downside correction since then, with the price hitting a fresh seven-month low of 129.50 in the previous daily session.

The short-term oscillators currently suggest that bearish forces have gained total control. Specifically, the RSI is declining near its 30-oversold zone, while the MACD histogram is retreating further below both zero and its red signal line.

Should the downfall persist, the price could retest its recent seven-month low of 129.50. Sliding beneath that floor, the pair might descend to form fresh multi-month lows, where the May 2022 low of 126.40 could provide downside protection. A violation of the latter could turn the spotlight to the March 2022 support of 121.20.

Alternatively, should the buying interest intensify, the December support of 133.62 could now act as the initial resistance region. Violating that zone, the bulls may then aim for 134.50 before the 138.10 resistance zone comes under examination.  Breaking above the latter, the price could then ascend to challenge 142.24.

In brief, USDJPY appears set to post fresh lows as the technical picture is constantly deteriorating and downside risks are intensifying. What’s more, the descending 50-day simple moving average (SMA) is closing the gap with the 200-day SMA, where a potential death cross could accelerate the decline. 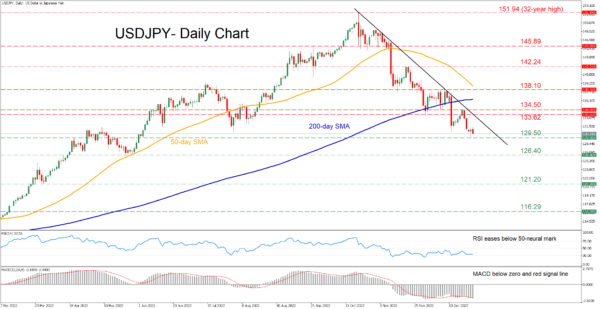