The dollar index accelerated higher at the start of the US session on Thursday, driven by surprise figures from the US labor sector, after Wednesday’s release of Fed’s minutes had a minor impact on the currency, as US policymakers reacted in line with expectations.

US private payrolls (ADP) rose to 235K in December, well above 150K consensus and November’s 127K, while weekly jobless claims fell to 204K from 223K previous week and 225K forecast, hitting the lowest since the last week of September.

The data signal that US labor market remains strong, boosting worries that the US central bank could continue raising interest rates for a longer than initially estimated that prompts investors back into US dollar.

Fresh strength further improves near-term picture, as bullish momentum is rising and 10/20DMA’s turned to bullish setup, though more work at the upside is still needed to signal reversal and confirm a double-bottom at 103.06/12 (Dec 15 and Dec 30 lows respectively).

Economists expect hiring to rise by 200K in December, after 263K increase previous month and any stronger surprise at the upside to provide further boost to the greenback. 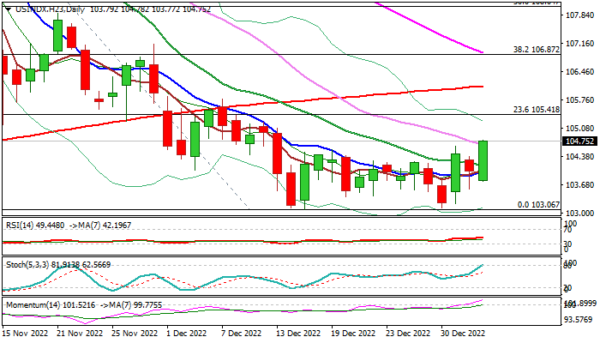