USDCHF Awaits Its Next Leg Higher; Bears Still Around

USDCHF is making another attempt at breaking above the 0.9300 level and the 20-day exponential moving average (EMA) after Wednesday’s quick bounce on the 0.9200 floor.

The pair avoided a drop towards the lower boundary of the short-term bearish channel earlier in the week, raising hopes for a bullish breakout above 0.9355. The RSI and the MACD are also sending some encouraging signals as the indicators have been trending positively and against the market direction since mid-December, displaying a bullish divergence setup; this is usually considered a sign that buyers are gaining control.

That said, with the tough constraining line laying overhead at 0.9400, buying tendencies could soon fade. Note that the 23.6% Fibonacci retracement of the latest downleg and the 50-day EMA are within the same neighborhood.

If the bulls successfully knock down that wall, the price may speed up towards the 200-day EMA and the 38.2% Fibonacci zone of 0.9540. Then, the falling trendline, which connects the highs from June 15 and September 7, may come on the radar ahead of the 50% Fibonacci of 0.9655.

In the case that the price closes below the 20-day EMA once again, all eyes will turn back to the 0.9200 base. Failure to pivot here could confirm additional losses towards the channel’s lower boundary seen around 0.9085. The support line drawn from the May 27 low could be the next target around 0.9000.

Summarizing, although USDCHF seems to be setting the ground for an upside reversal, downside risks will keep lingering in the background as long as the pair trades below 0.9400. 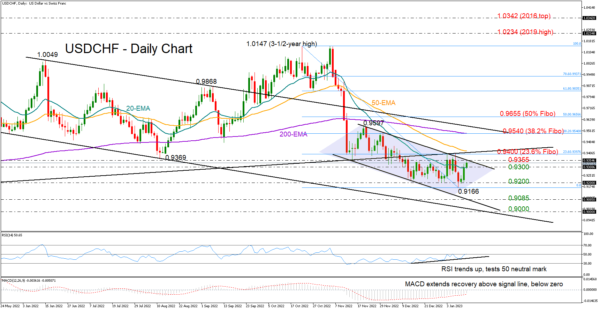