In result of the previous trading session, the currency exchange rate slipped through the updated 23.6% Fibonacci retracement level at 1.1679 and, in essence, made a rebound from the bottom trend-line of a dominant descending channel. Due to absence of any fundamental data releases, bulls are likely to try to return the rate back to 1.1643, at minimum. However, the further recovery of the Euro seems unlikely because of a combined resistance formed by the monthly S1 at 1.1658, the weekly PP at 1.1674 and the falling 55-hour SMA. The southern side, in contrast, remains barrier-free. In addition to that, there is couple of fundamental factors that incite further appreciation of the Dollar, such as Donald Trump’s tax reform and possible nomination of John Taylor, as the Fed chair. 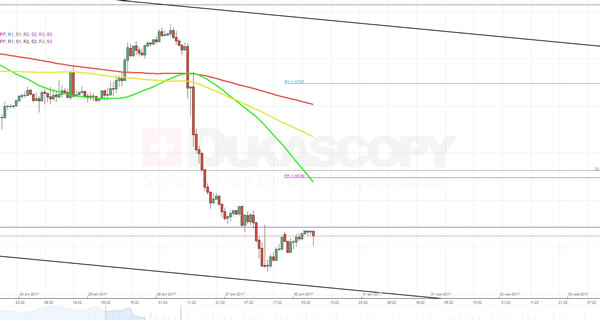