GBP/CAD has been trading in a channel down since mid-August. The pair, however, has failed to reach the bottom boundary of this pattern several times, thus resembling more an ascending wedge. In the short term, the Pound bounced off the upper channel boundary last week and began trading lower. Given that solid Canadian GDP data release on December 1 strengthened the Loonie, the rate failed to form a proper pattern. Meanwhile, the Pound has lost its strong momentum during the past trading hours, as the combined resistance of the weekly and monthly PPs, the 200– and 100-hour SMAs pressure the given currency near the 1.7150 mark. This might force the pair into a period of consolidation, but nevertheless guide it towards the upper boundary of the short-term channel circa 1.72. In case bears prevail, the nearest support is the weekly and monthly S1s at 1.6860. 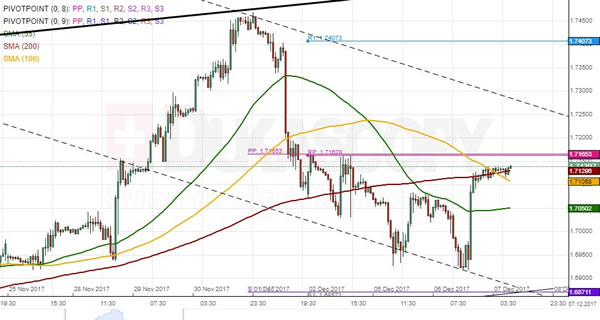