NZDUSD edged sharply lower in the previous session while is paring some losses the last hours. The price has been consolidating within a trading range with upper boundary the 0.7435 resistance level and lower boundary the 0.7185 support barrier since January 24. When looking at the bigger picture the pair lacks a clear trend after its rally from 0.6780 stalled at 0.7435.

In the 4-hour chart, momentum indicators are also pointing to a continuation of the sideways channel but with a downside risk. The MACD oscillator is standing below the trigger line and slightly above the zero line with weak momentum. Also, the RSI indicator dropped below the 50 level and is flattening.

If the price extends its losses below the 40-simple moving average of 0.7245, it could open the door for the 0.7185 – 0.7200 support area. A penetration of the aforementioned range could drive the pair towards the next support at 0.7140.

On the flip side, in the event of an upside reversal, the next level to watch is the 0.7310 resistance barrier. Further gains could push the price until the 0.7385 level. 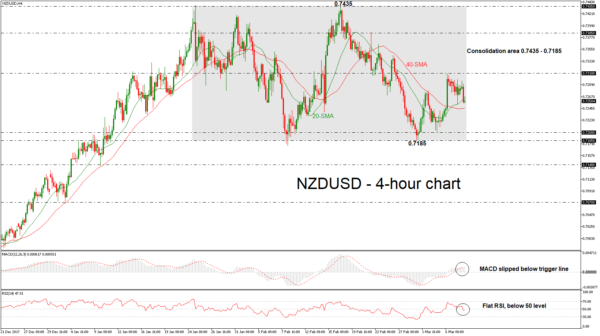