As signaled in my previous reports, the USDTRY pair regained its previous high at 3.9814 and surged through psychological 4.00 barrier into uncharted territory, hitting new record high at 4.0359 on Friday.

There were several factors that prompted lira’s most recent bearish acceleration, which signals that the fall is not over and weakness could extend.

Failure of CBRT to react on rising inflation, with recent rate hike seen as rather symbolic action and the central bank being unable for more significant action with only $90 bln reserves, along with widening Turkey’s current account deficit and higher US interest rates, marking the key factors that brought lira into current position.

The pair is on track to extend rally as negative sentiment around lira has worsened. Break above psychological 4.00 barrier is another negative signal which could drive the pair higher.

Corrective easing could be seen as positioning for fresh rally and should be ideally contained above 3.9520 (19/20 Mar highs). 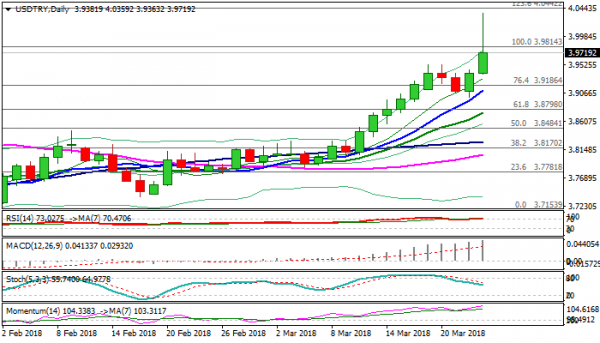 Swissquote Bank SAhttp://en.swissquote.com/fx
Trading foreign exchange, spot precious metals and any other product on the Forex platform involves significant risk of loss and may not be suitable for all investors. Prior to opening an account with Swissquote, consider your level of experience, investment objectives, assets, income and risk appetite. The possibility exists that you could sustain a loss of some or all of your initial investment and therefore you should not speculate, invest or hedge with capital you cannot afford to lose, that is borrowed or urgently needed or necessary for personal or family subsistence. You should be aware of all the risks associated with foreign exchange trading, and seek advice from an independent financial advisor if you have any doubts.