The Turkish lira hit new record high at 4.0657 on Friday, in extension of previous day’s strong fall, with signals that lira could weaken further. Fears among investors rose after news that Turkish government works on measures to lower interest rates, with tax cuts also being in the agenda. Turkish central bank’s monetary does not follow the situation in the Turkish economy and current signs that interest rates could be lowered despite double-digit inflation, sets scope for further negative scenario for lira. The USDTRY pair is holding in uncharted area and fresh extension higher approaches initial target at 4.0830 (Fibo 138.2% projection of the upleg from 3.7143 trough) and eyes psychological 4.10 barrier. Upbeat US jobs data could further accelerate dollar for test of initial targets. The pair is also on track for strong bullish weekly close which would be positive signal for further advance, as CBRT policy meeting (due on 25 Apr) comes in focus. Today’s low at 4.0321 marks initial support, but more significant point lies at psychological 4.00 support, reinforced by rising daily Tenkan-sen. 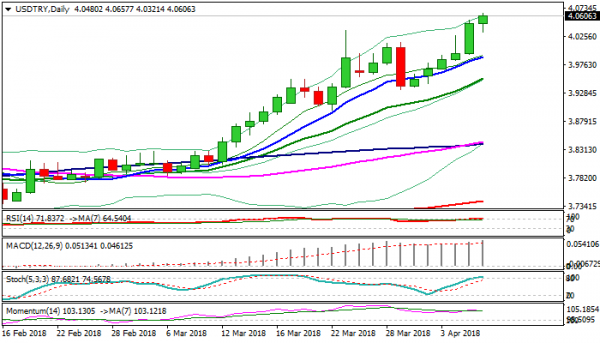