WTI Oil was among the top winners, ending week above $52.00 per barrel, on the second bullish week.  Oil price initially broke above psychological $50.00 barrier and accelerated higher on strong fall in Crude inventories. API report that was released on Tuesday showed stronger than expected drop in crude stocks that fell by 1.83 million barrels previous week, that improved the sentiment in the markets, as investors were also hoping on extension of OPEC and non-OPEC members agreement on keeping production limited that would ease rowing fears of global oversupply.

The report slowed oil’s rally and price briefly returned below $50.00 handle, however, easing was short-lived. North Korea’s missile test was the initial boost for oil prices that rose on renewed political uncertainty, with US missile strikes on Syria on Friday, adding fresh support to oil price that accelerated further up. US WTI oil contact for May delivery hit fresh one-month high at $52.92 on Friday, establishing strong bullish sentiment that would boost oil price further and re-attract key med-term barriers at $55.00 zone in coming days. 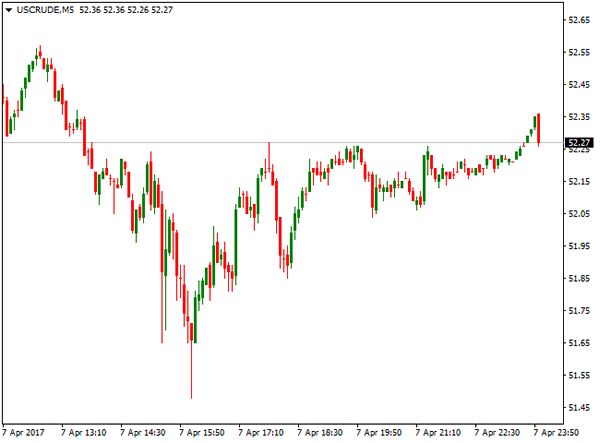 Brent Crude Oil followed positive sentiment and peaked at $56.06 per barrel on Friday, hitting the highest level in one month and ending the second consecutive week in strong bullish mode. Brent price was initially boosted by production shortage in North Sea fields, with fresh political uncertainty over newly developed political over North Korea and US attack on Syria that also cooled significantly relations between Russia and the United States, being supportive for further rise in oil prices. 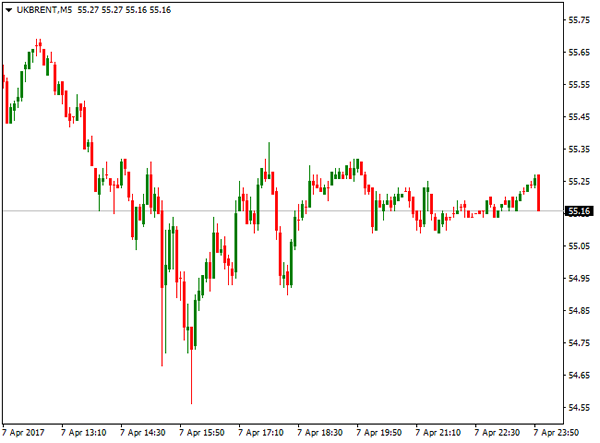 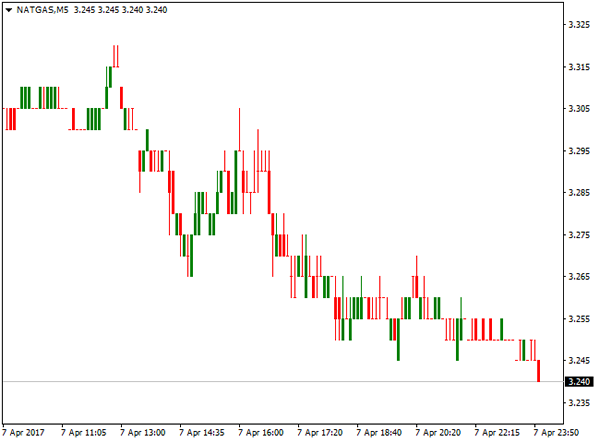 However, US jobs data that boosted the dollar, weakened strong bullish sentiment, as gold price ended week below pivots at $1258/63 and closed at $1255.
Gold was also pushed lower by unchanged hopes that Fed may hike rates again in June, after US jobs report did not dent these expectations. Gold is sensitive to moves in US interest rates and signals of increasing rates increase pressure on the yellow metal.

Solid supports lay at $1250 zone, with extended downticks seen contained above the next set of supports at $1240 zone, in order to keep bullish setup intact for renewed attempts higher. 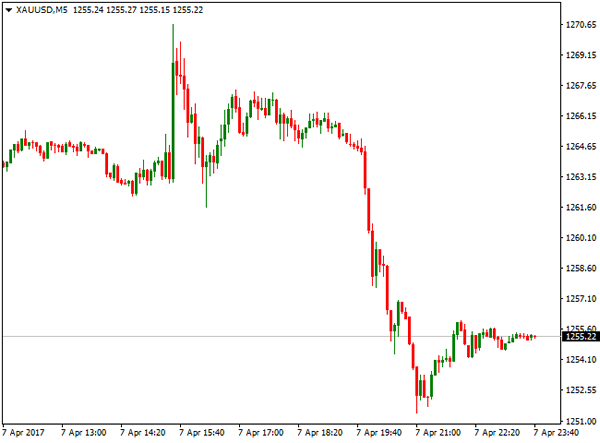 Copper contract for May delivery ended week in neutral mode, with weekly action being shaped in Doji candle, signalling strong indecision. The price ranged between $2.5935 and $2.6940 during the week, getting boosted after Chinese markets returned to business after holidays. However, gains proved to be short-lived, as bearishly aligned technical studies kept rallies limited and short-term price action holding in the range for the second week. Copper price is limited between two technical boundaries at 2.6345 and 2.6726, with clearer direction signals seen on break of either side. 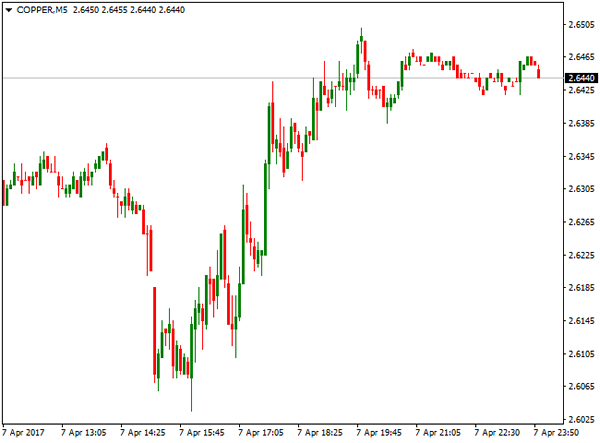 Sugar11 contract for May delivery remained in red for the fifth straight week and dipped to fresh eleven-month low at $16.04 on Wednesday. Bounce in past two days is seen as technical correction on strongly oversold conditions. Corrective rally is facing strong barrier at $17.09, which is expected to cap rallies and keep strong overall bearish picture intact. Technical studies confirm strong bearish sentiment after Head and Shoulders pattern was formed on weekly chart, indicating that sugar price may fall further. Important Fibonacci support at $16.87 has been dented that gives strong bearish signal for further easing. After correction, fresh weakness may extend next targets at $15.23 and $15.00. 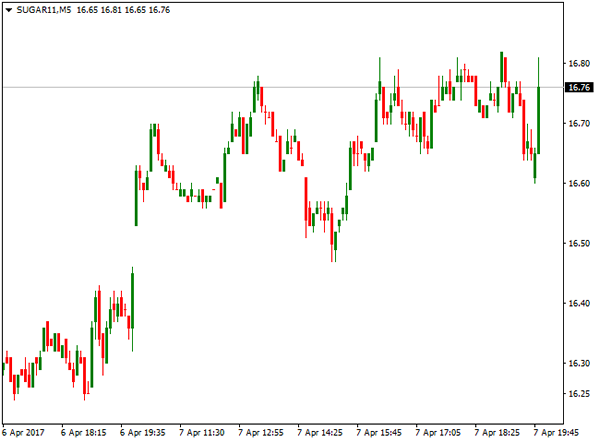 US benchmark indices: Dow Jones; Nasdaq 100 and S&P 500 ended week in positive/neutral mode. Nasdaq 100 Index hit fresh all-time high on Wednesday at 5481, as Us stocks were boosted by stellar private jobs report that underscored the strength of the economy. Positive economy outlook boosted financial stocks and calmed investors’ fears about President Trump’s ability to deliver on his policy plans.

Dow Jones index ended week in neutral mode, shaped in weekly Doji candle, but remains within broader consolidation in past two weeks, after pullback from fresh record high, posted on Mar 1 showed signs of stall. Weakening daily technical studies show risk of further easing, as investors are looking for signals about the strength of the US economy, with increased political uncertainty in light of the latest US attack at Syria and stronger US dollar, seeing the index under pressure in the near-term. 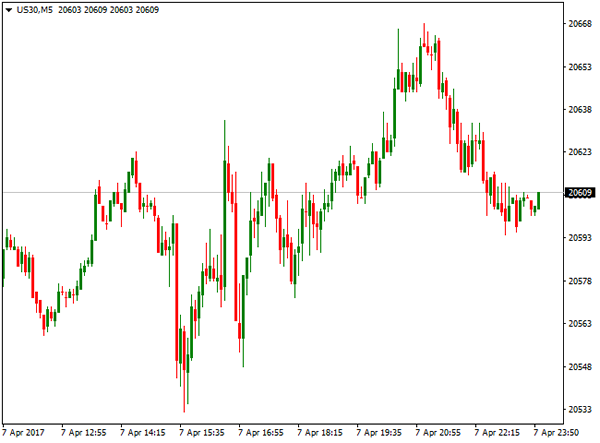 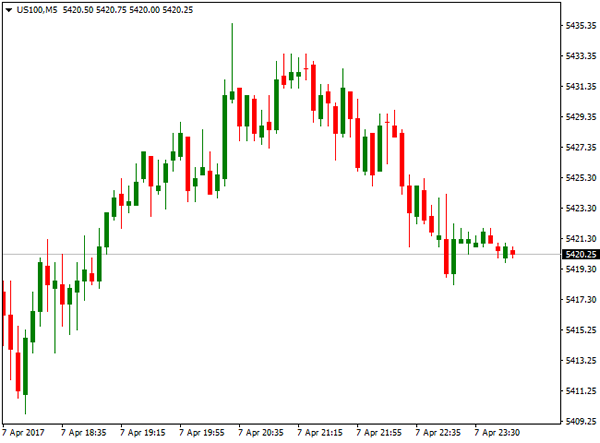 Britain’s FTSE 100 index registered the second straight bullish week and enjoyed support from weaker pound. The index ended Friday’s trading at 7290, slightly above important Fibonacci barrier that could be seen as a trigger for further recovery. The price remains underpinned by rising daily Ichimoku cloud and eyes next pivotal barrier at 7311, break of which would be seen as additional bullish signal. 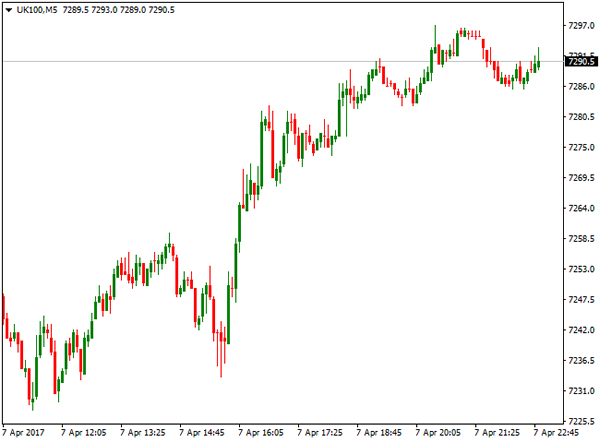 Series of top releases influenced money market last week. US Federal Reserve released minutes of FOMC last meeting in March on Wednesday. Minutes sent some warning signs to the markets that resulted in strong fall of the US dollar against Japanese yen that reached lows, last seen in late November 2016.

With gradual increase in interest rates being already priced in, main warning from minutes was an indication that Fed is ready to target the over bloated balance sheet. The discussions of reducing the balance sheet that is currently at $4.5 trillion, suggests double tightening policy, on higher interest rats and reduction in Quantitative Easing programme.

This is expected to be the next topic in monetary policy action, with key question of whether the Fed will be able to apply these policies without causing serious disruptions in the markets. If the US economy continues to grow, trimming of Fed’s balance sheet towards the end of the year would make sense, as Fed is looking to start normalization process of its balance sheet that needs to come down significantly from its current size, but without decision on its desired levels being made so far.

The minutes of ECB’s March 9 meeting were released on Thursday. The ECB kept its stance and message unchanged at the March meeting, the removal of a reference to being ready to act with all available instruments – was taken by markets as a hawkish shift, with some considering it as a signal for earlier-than-expected policy normalization. This brought forward predictions for the ECB’s first interest rate increase in years, even as policymakers tried to cool those expectations, arguing that they merely signalled reduced risk, not quicker. ECB President Mario Draghi and Chief Economist Peter Praet both suggested on Thursday that the bank will stick to its policy path, including for bond buying and record-low rates, for some time to come, as they are not yet convinced the euro zone economy is back to health.

The CNB (Czech central bank) has dropped it peg with the Euro on Thursday, ending long-held currency regime. With stronger volatility being expected, on bad experience on Swiss peg debacle two years ago, reaction of Czech koruna was moderate after the decision.

US jobless claims recorded their biggest drop in nearly two years last week, pointing to further tightening in the labour market. Initial claims for unemployment benefits declined 25.000 to 234.000, in the week ended April1, in the largest drop since April 25 2015. Claims have now been below 300.00 threshold for or 109 straight week, in the longest stretch since 1970 and being currently near full employment.

The dollar appreciated against the euro and yen on better than expected jobless claims data.

The United States made unilateral action on Friday and attacked Syrian airbase from which it said a deadly chemical weapons attack was launched last week. The US army fired a dozens of cruise missiles during the attack from two US warships. The attack immediately raised tensions with Russia, as spokesman for Russian President Vladimir Putin said the strike had seriously damaged ties between Washington and Moscow. This was the toughest direct US action in six-year war that left US President Donald Trump facing his biggest foreign policy crisis since he entered the White House in January. US officials announced that the attack was the single strike and there are no plans for further escalation.

US Non-Farm payrolls report was released Friday and strongly disappointed on only 98K new jobs created in March, compared to upbeat results in first two months of 2017. Forecast for March was 180K, below 235K in February and upwards-revised numbers in January to 238K. After initial strong rise in Jan/Feb due to mild weather that mainly affected construction sector on seasonal hiring, sharp slowdown in March was seen mainly on fall in the temperatures and storms that lashed the Midwest and Northeast.

However, unemployment rate dropped to near 10-year low at 4.5% in March, down from 4.7% in the previous month, suggesting that labour market strength remained intact after miss in NFP numbers. Mixed jobs report pushed the dollar higher against the basket of major currencies, in view that June rate hike remained unaffected by release of US jobs data.

The Euro ended the second straight week in red against the dollar, after holding for most of the week within 1.0620/1.0700 congestion on mixed signals. The single currency showed no significant reaction after the second TV debate of French presidential candidates and also stayed without clear direction after speech of ECB president Mario Draghi and minutes of ECB’s last monetary policy meeting.

The pair was eventually pushed lower and took out key technical supports after dollar accelerated on US jobs data. Strong bearish close on Friday suggests that the Euro may extend weakness after losing 1.0600 handle. 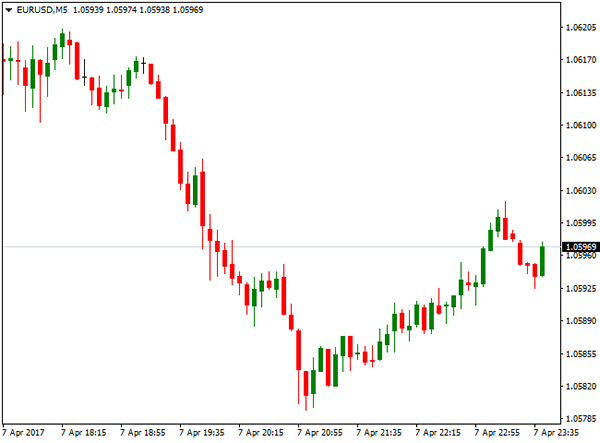 British pound was in a choppy mode for most of the week, being initially pressured by lower than expected UK Manufacturing and Construction PMI data that raised fears of slowdown in the economy, but received boost on upbeat Service PMI data that jumped to 55.0 in March from 53.3 in February and also beating the forecast at 53.5.

However, surveys show that UK economy probably slowed in Q1, compared to its strong growth last year. Cooling jobs market and Brexit getting underway were the main factors of slowdown. In addition, unexpected slide in British industrial output, further clouded the outlook for the UK’s economy. Sterling accelerated lower strongly after \UK data, with additional pressure coming on strengthening dollar. Cable broke below cluster of strong technical supports and ended week in red for the first time after three consecutive weeks of gains, turning near-term outlook in negative mode. 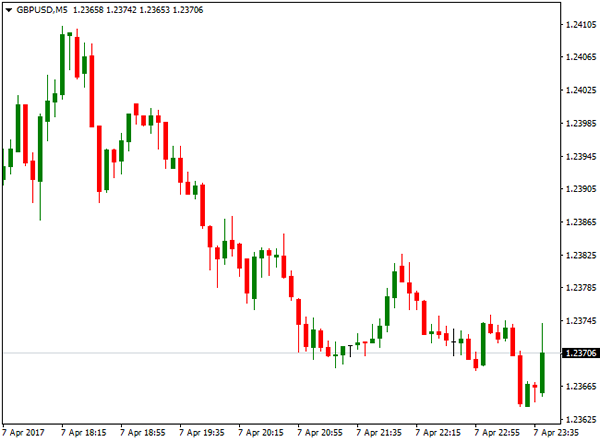 Japanese yen failed to capitalize on strong safe-haven buying last week that was triggered by increased risk aversion on political uncertainty after North Korea’s missile launch and US attack on Syria. Yen was well supported during the week but lacked momentum for final break below psychological 110.00 barrier against US dollar. Several strong downside rejections during last week generated signal of possible basing, as the dollar bounced strongly after jobs data on Friday and attacked the upper pivotal barrier at 111.36, weekly Ichimoku cloud top, easing mounting downside risk on several attempts at 110.00 support zone. 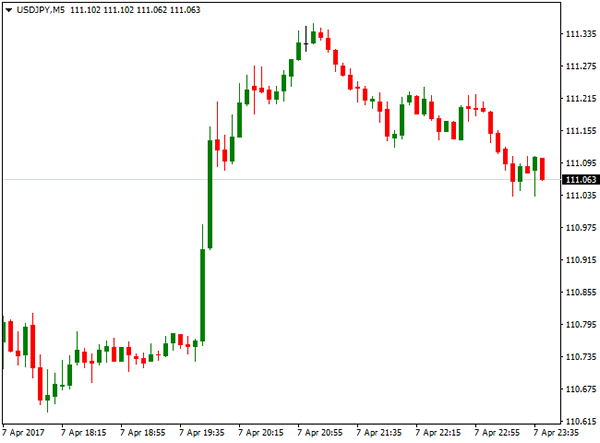 Canadian dollar reached four-day high against the US dollar on Friday on stronger than expected domestic employment data. Canada added 19.400 new jobs in March against forecasted 5000 new jobs. CAD’s rally that peaked at 1.3340 and reversed over half of losses made during the week, proved to be short-lived, as greenback managed to recover and return back to 1.3400 zone, marking bullish end of the week. 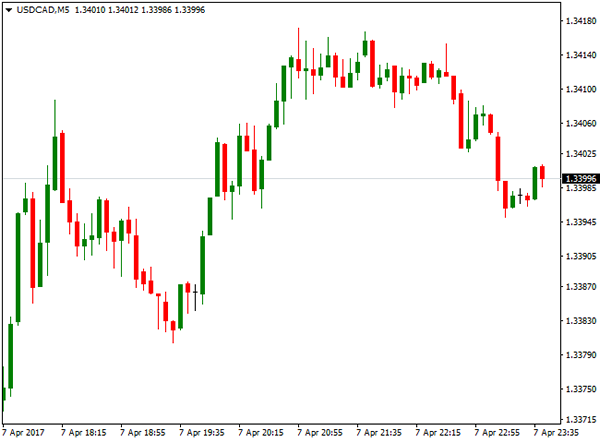