Rob Dobson, Director at IHS Markit, said: “Further loosening of COVID-19 restrictions at home and abroad led to another marked growth spurt at UK factories. The headline PMI rose to a near 27-year high, as output and new orders expanded at increased rates. The outlook for the sector is also increasingly positive, with two-thirds of manufacturers expecting output to be higher in one year’s time. Export growth remains relatively subdued, however, as small manufacturers struggle to export.

“The sector also remains beset by supply-chain issues and rising inflationary pressures. Disruption following Brexit and COVID-19, especially at ports, caused a further near-record lengthening of supplier delivery times. The resulting input shortages kept producer price inflation among the highest over the past four years. Manufacturers have generally passed on these costs to customers, as highlighted by a survey-record rise in selling prices, but it is hoped that this inflationary backdrop will subside once supply and demand come back into line as covid-related logistic delays ease.” 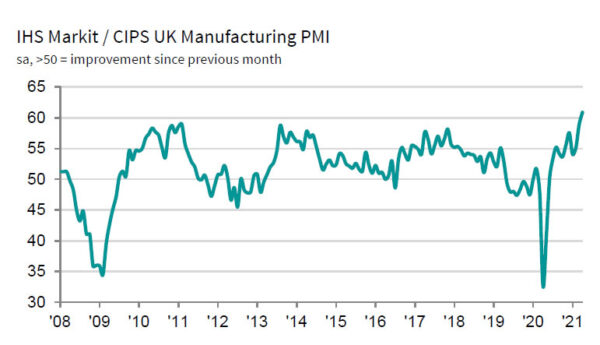