Action Forex
HomeLive CommentsDOW dropped after hawkish Fed, but no threat to up trend yet

DOW dropped after hawkish Fed, but no threat to up trend yet

US stocks tumbled overnight after much more hawkish than expected FOMC projections. But the three major indices managed to pare back much of earlier losses to close just slightly lower. DOW lost -0.77%, S&P 500 dropped -0.54%, while NASDAQ declined -0.24%.

As for DOW, it’s still holding on to 55 day EMA, and stay well inside the medium term rising channel. Thus, there is no threat to the up trend for the moment. Another rise through 35091.56 is still in favor. But the next few days will be crucial on whether selloff could gather momentum. Firm break of the channel support would likely bring a correction to whole rise from 26143.77, and target 38.2% retracement at 31673.50. 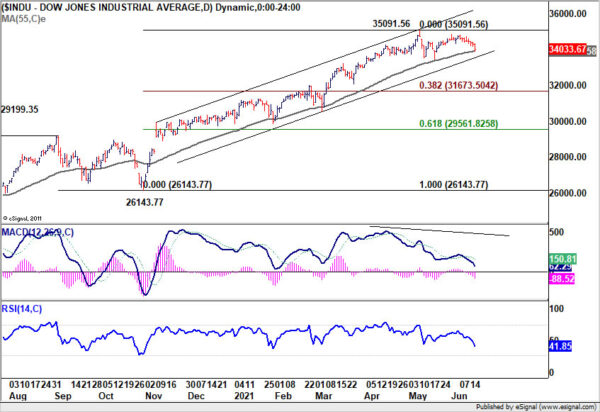 10-year yield also jumped notably and closed up 0.070 to 1.569. Price actions from 1.765 high are clearly corrective and medium term up trend is expected to resume at a later stage. But the timing of an upside breakout would very much depend on development in stocks and upcoming economic data. 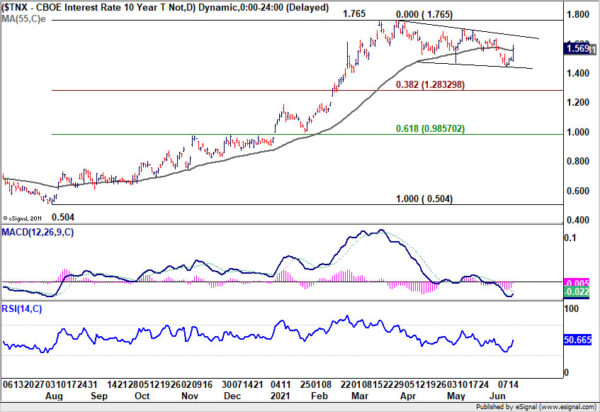