France PMI manufacturing dropped to 51 in Jun, services to 54.4

“France endured a particularly sharp slowdown in growth during June, as well as a further bifurcation between the manufacturing and services economies. Nonetheless, trends deteriorated in a broad-based fashion over the month as high inflation begins to bite harder. Overall growth was at its slowest since the Omicron disruption was at its peak in January. Barring this though, the ‘flash’ PMI for June is at its lowest level since April 2021.

“While a loss of momentum was to be expected as the resumption of economic activities post-lockdown boosted growth, the slowdown has been aggravated by substantial price pressures. This has been particularly aggressive in the manufacturing sector, where output and new orders both declined strongly and for the first time since October last year, serving as a worrying sign for what could be to come for the service sector.

“The slowing economic trend in France is also compounded by a fresh bout of political uncertainty due to the hung parliament result in the national elections. Business confidence slid to a 19-month low in June. Overall, June ‘flash’ PMI data add to tangible recession risks for France.” 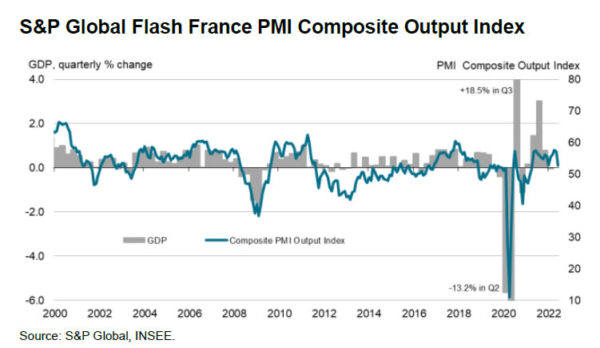