“August flash PMI data signalled further disconcerting signs for the health of the US private sector. Demand conditions were dampened again, sparked by the impact of interest rate hikes and strong inflationary pressures on customer spending, which weighed on activity. Gathering clouds spread across the private sector as services new orders returned to contractionary territory, mirroring the subdued demand conditions seen at their manufacturing counterparts. Excluding the period between March and May 2020, the fall in total output was the steepest seen since the series began nearly 13 years ago.

“Lower new order inflows and continued efforts to rein in spending led to the slowest uptick in employment for almost a year. Reports of challenges finding suitable candidates started to be countered by those companies noting that voluntary leavers would not be replaced with any immediacy due to uncertainty regarding demand over the coming months.

“One area of reprieve for firms came in the form of a further softening in inflationary pressures. Input prices and output charges rose at the slowest rates for a year-and-a-half amid reports that some key component costs had fallen. Although pointing to an ongoing movement away from price peaks, increases in costs and charges remained historically robust. At the same time, delivery times lengthened at the slowest pace since October 2020, albeit still sharply, allowing more firms to work through backlogs.” 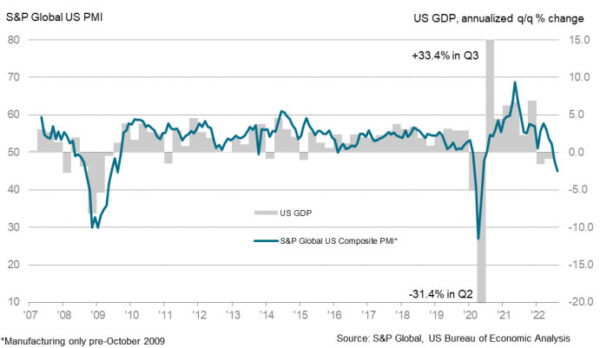