As aussie has retreated after marginal rise to 0.7741, suggesting consolidation below this level would be seen and pullback to 0.7606-18 support area is likely, however, still reckon downside would be limited to support at 0.7512 and bring another rise later, above said resistance at 0.7741 would extend gain to previous chart resistance at 0.7778, however, a break above there is needed to retain bullishness and signal early erratic upmove from 0.6827 (2016 low) has resumed for retest of 0.7835 (2016 high) first. Looking ahead, once this level is penetrated, this would encourage for headway to 0.7890-00 but upside should be limited to 0.7950.

On the downside, although initial pullback to 0.7610-15 cannot be ruled out, reckon downside would be limited to support at 0.7512 and bring another rise later. A daily close below the upper Kumo (now at 0.7452) would abort and suggest top is formed instead, bring weakness to 0.7390-00 and possibly towards 0.7350 but reckon 0.7300-10 would remain intact, bring rebound later. 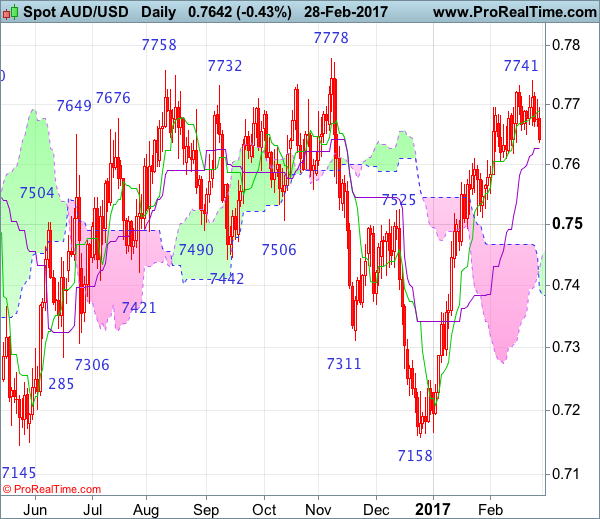 On the weekly chart, as aussie has continued trading a firm undertone after staging a strong rebound from 0.7158, suggesting further gain towards resistance at 0.7778 cannot be ruled out, however, as broad outlook remains consolidative, reckon upside would be limited and price should falter below 2016 high at 0.7835. Looking ahead, only above this level would suggest an upside break of recent established broad range has occurred, bring further subsequent rise towards 0.7900.

On the downside, although initial pullback to 0.7600 cannot be ruled out, reckon minor support at 0.7512 would limit downside and bring another rise later. A weekly close below the Kijun-Sen (now at 0.7468) would abort and suggest top is possibly formed, bring weakness to the Tenkan-Sen (now at 0.7427), break there would add credence to this view, bring subsequent weakness to the lower Kumo (now at 0.7331) but break of 0.7285-90 support is needed to signal the rebound from 0.7158 has ended and bring further decline to 0.7200-10, then towards strong support area at 0.7145-58. 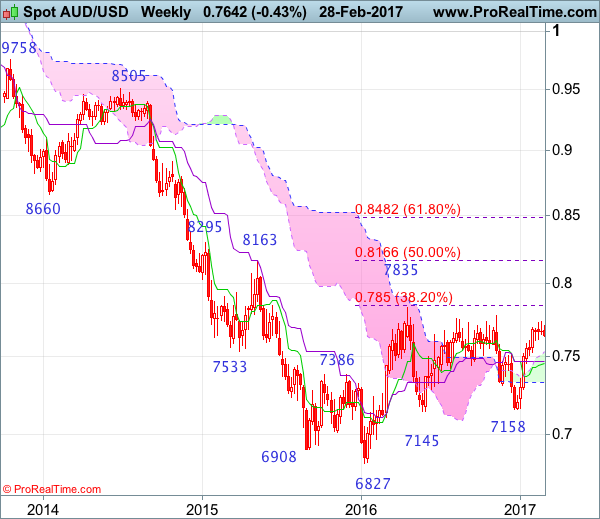