As cable has remained under pressure, suggesting the erratic decline from 1.3658 is still in progress and mild downside bias remains for this move to bring retracement of recent rise, hence further weakness to 1.3300-10 would be seen, however, near term oversold condition should limit downside to 1.3250 and reckon 1.3215-20 (50% Fibonacci retracement of 1.2774-1.3658) would hold from here, price should stay well above previous support at 1.3153, bring rebound later.

In view of this, we are looking to sell cable on recovery as 1.3450-60 should limit upside. Above resistance at 1.3514 would abort and signal the retreat from 1.3658 top has ended, risk a stronger rebound to resistance at 1.3571 but upside should still be limited to 1.3600 and price should falter well below recent high at 1.3658, bring another retreat later. Our preferred count is that (pls see the attached chart) the wave IV is unfolding as a complex double three (ABC-X-ABC) correction with 2nd wave B ended at 1.2774, hence 2nd wave C is unfolding and may extend further gain to 1.3650, then 1.3700, however, overbought condition should limit upside to 1.3770-75 and reckon 1.3800-10 would hold from here, bring retreat later. 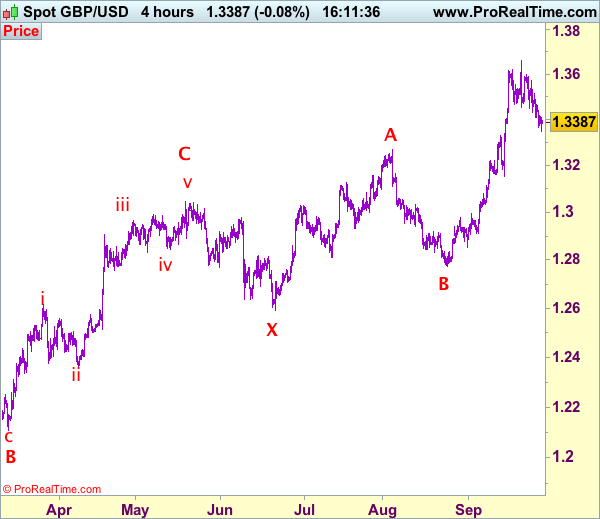