Although cable rebounded from 1.3371, as renewed selling interest emerged at 1.3461 and sterling has slipped again, suggesting near term downside risk remains for the retreat from 1.3550 (last week’s high) to bring retracement of recent rise, hence weakness to 1.3330-35, then 1.3300 cannot be ruled out, however, reckon downside would be limited to 1.3250-60 and previous support at 1.3221 should remain intact, bring rebound later.

In view of this, would be prudent to exit long entered at 1.3410 and stand aside in the meantime. Only above said resistance at 1.3461 would suggest low is possibly formed, bring rebound to 1.3500, break there would signal the pullback from 1.3550 has ended and revive bullishness for retest of this level first. Looking ahead, a break of 1.3550 would extend the rise from 1.3027 low to 1.3595-00, however, reckon recent high at 1.3658 (Sept high) would hold from here due to near term overbought condition, bring retreat later. Our preferred count is that (pls see the attached chart) the wave IV is unfolding as a complex double three (ABC-X-ABC) correction with 2nd wave B ended at 1.2774, hence 2nd wave C could have ended at 1.3658. 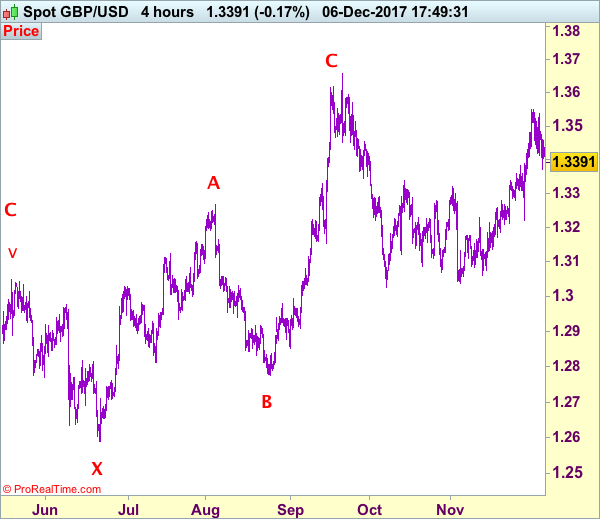