It may be hard to escape the latest bombardment of Brexit headlines but crucial economic data coming up at the end of the week may help divert attention to the recovery in Britain as COVID-19 cases continue to rise rapidly across the country. Retail sales numbers for September are due on Friday at 09:00 GMT, to be swiftly followed by the flash October PMIs at 08:30 GMT. Although growth in the economy has stayed positive since May, there are increasing signs that the recovery is fading as more UK regions are placed under partial lockdown. The pound, however, has been taking its cues mostly from the Brexit happenings as trade negotiations with the EU have been proceeding far from smoothly.

The UK economy grew by a less-than-expected 2.1% m/m in August, leaving output around 10% below pre-pandemic levels. The slowdown in the recovery came despite further restrictions being lifted in the summer months as well as government incentives to encourage the public to eat out to support businesses in the hard-hit hospitality sector.

Although UK GDP data are subject to constant revisions, that still raises question marks about the recovery going forward as several restrictions have been re-introduced since September, while many parts of the country are now under some form of a local lockdown. The trend in retail sales supports the deteriorating picture. Retail sales growth eased to 0.8% m/m in August and are expected to have moderated further in September to rise by just 0.4% m/m. 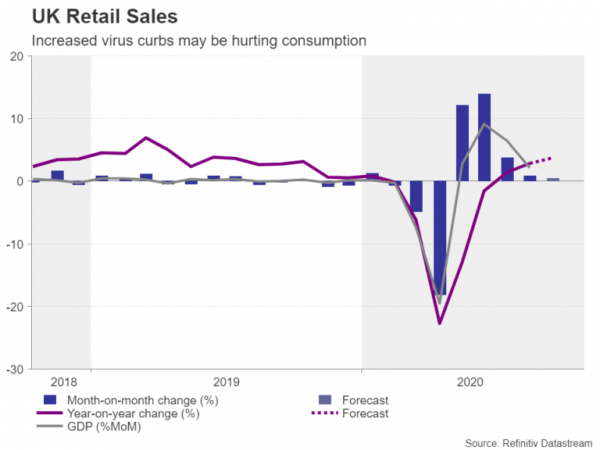 Are UK PMIs overstating the recovery?

The survey-based PMIs by IHS Markit have been somewhat more upbeat, suggesting the recovery only began to lose some steam in September. The forecasts for October’s flash readings put them all comfortably above 50: the manufacturing PMI is projected to fall to 53.1, the services PMI is expected to slip to 54.0 and the composite PMI to fall to 53.9. 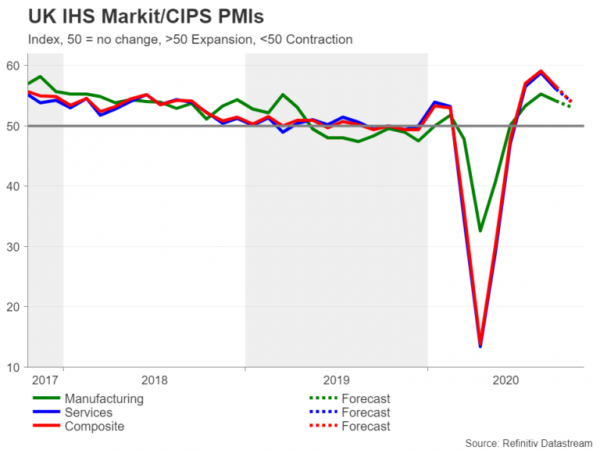 If those forecasts are to be believed, there is little danger of the UK entering a double-dip recession in the next month or two. But with the virus situation more likely to get worse than improve in the coming months, the outlook for the fourth quarter is nonetheless dimming fast.

The faltering recovery couldn’t have come at a worse time for British businesses, which have to make costly preparations so they can trade under new rules with the European Union for when the transition period ends on December 31. The main problem here of course is that companies on both sides of the Channel are still in the dark as to what terms they’ll be doing business together as no agreement on a post-Brexit trade deal has been reached yet.

UK and EU negotiators are currently trying to set the stage for an intensified phase of talks, but Boris Johnson is demanding more concessions from his European counterparts before giving the green light. Upset at the EU’s apparent attempt to run down the clock and for not treating the UK as a sovereign equal, Johnson may yet walk away from the talks.

Pound not convinced by Brexit rhetoric

However, behind all the posturing, the one thing that has become clear from these latest episodes is that both sides want a deal. That presumably explains why sterling has mostly held above the $1.29 level throughout October.

The pound would probably be trading even higher if it wasn’t for the Bank of England openly debating about whether negative interest rates would work in the UK. Friday’s data could increase the odds of the BoE going down that road should they disappoint.

Immediate support for cable is at the $1.2860 region, which could be broken if the PMIs sharply miss the expectations. A drop below $1.2860 would open the way for the 32.8% Fibonacci retracement of the March-September uptrend, which lies just below the 200-day moving average (MA) at $1.27. A steeper decline towards the 50% Fibonacci of $1.2443 is likely if the Brexit impasse isn’t resolved soon.

To the upside, a sustained climb above the 23.6% Fibonacci and the 50-day MA, which are in the vicinity of the 1.30 level, is possible if the data are surprisingly upbeat and/or Brexit headlines point to progress. This would then bring the $1.3250 resistance into focus.