Action Forex
Home With a Vaccine on the Horizon, What's Next for Gold?

With a Vaccine on the Horizon, What’s Next for Gold?

A combination of cheap money policies and runaway government spending propelled gold prices to new record highs earlier this year, but the metal has been trapped in a range for three months now, and the burning question is whether bullion’s best days are behind it now that a vaccine is on the radar. Maybe not. The ‘reflation’ trade could dominate next year, and central banks are unlikely to allow bond yields to move higher from here, setting the stage for lower real rates that typically benefit gold. The main downside risk is from a stronger dollar.

It has been a great year for gold so far, with the precious metal rising almost 23% as central banks slashed interest rates to zero and government debts ballooned. Gold pays no interest to hold, so it becomes more attractive the lower interest rates fall. Likewise, when government deficits explode so dramatically, markets question whether those governments will meet their obligations, and whether they will ultimately do so by debasing fiat currencies.

The other source of fuel for gold has been the plunge in the dollar. Gold contracts are typically denominated in US dollars, so bullion and the greenback have an inverse relationship. When the dollar falls, it becomes cheaper for investors using foreign currencies to buy gold, boosting demand for the metal. 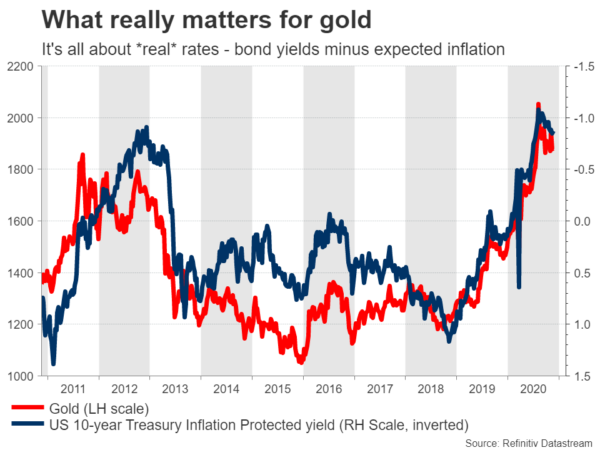 This trifecta has been the driving force for bullion this year, but the price action has cooled in recent months, and the vaccine announcement from Pfizer last week pushed gold prices substantially lower. The encouraging news drove the yields on government bonds higher as investors priced in a better tomorrow, taking the shine off gold.

The question now is whether the vaccine spells the beginning of the end for gold’s rally, or not.

Admittedly, the party in gold may not be over. It is natural to envision gold falling next year as vaccines are rolled out and things start going back to normal, but perhaps it’s not quite that simple. Indeed, following the 2008 crisis, gold did not peak until 2011, well into the recovery.

The single most important variable for gold prices is the level of real interest rates, which means bond yields minus expected inflation. It follows that if bond yields stay at current levels but inflation rises, real yields will fall and gold could come roaring back. 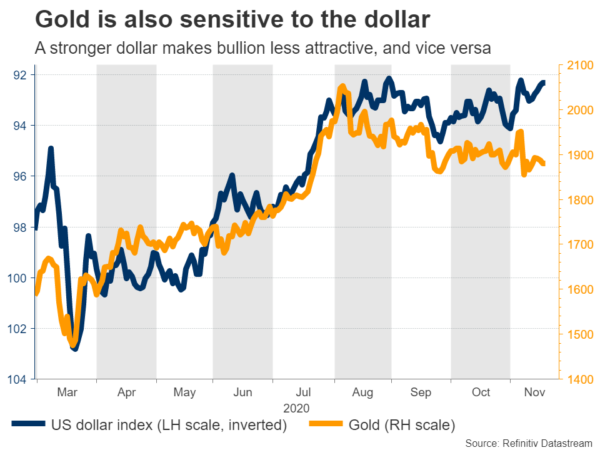 How likely is this scenario? Let’s examine yields first. Normally, as the economy recovers, one would expect bond yields to move higher – not stay flat. However, these are not normal times. The Fed has made it clear that it won’t raise rates until 2023, even if inflation overshoots its 2% target.

More broadly, central banks are unlikely to allow yields to move significantly higher from here. Rising yields essentially mean that borrowing costs increase on things like mortgages, which could slow the recovery down. It is the last thing a central bank wants, as it would undermine all its previous efforts.

Now on the inflation side, we could see a decent comeback around April-May next year, especially in America. Personal savings rates have increased dramatically because of the stay-at-home culture, which means that a lot of demand is waiting to be unleashed. Combined with massive amounts of government spending in the pipeline, that is a great recipe for inflation. 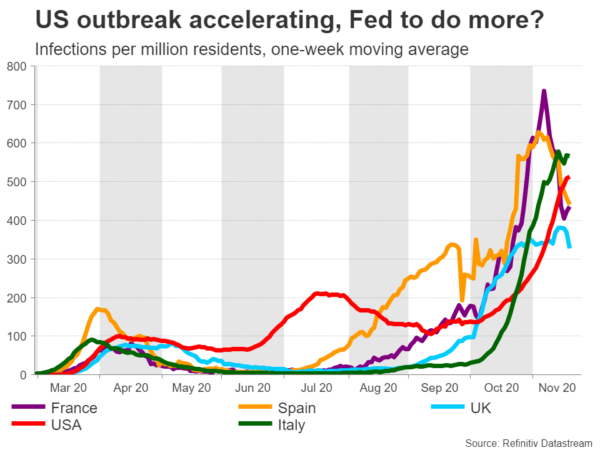 Why April? This is when all hell broke loose this year and inflation collapsed, so once those deeply negative numbers drop out of the yearly calculation, most inflation metrics are likely to shoot higher.

For now, it’s all about the Fed

In the near term, a lot will depend on what the Fed does in December. If policymakers deliver another round of liquidity to support the US economy now that infections are spiraling out of control again, that could hammer bond yields and the dollar lower, boosting gold prices. Otherwise, it may be a rough holiday season for bullion.

Admittedly, the Fed has been very aggressive throughout this crisis, so it is difficult to envision policymakers doing nothing more. Several US states have imposed tougher restrictions on social life lately, which will inevitably hit growth in Q4. The vaccine is great news, but that’s a longer-term story and the economy has to get through the winter first.

Another helping hand for gold may come from the seasonal front. Bullion tends to perform well in January-February over the past two decades, and in recent years, traders seem to be frontrunning this move from December. Having said that, if there was ever a year when seasonal patterns may not matter, it is this one.

Main risk is a stronger dollar

As for the downside risks, the biggest one is the US dollar strengthening. The US currency has lost a lot of ground this year as the Federal Reserve ‘out-printed’ all other major central banks, but if the Fed gets cold feet now that a vaccine is in sight, that could change quickly. Additionally, if the Republican-controlled Senate blocks large stimulus packages, the dollar could jump on expectations for smaller deficits, pushing gold lower. 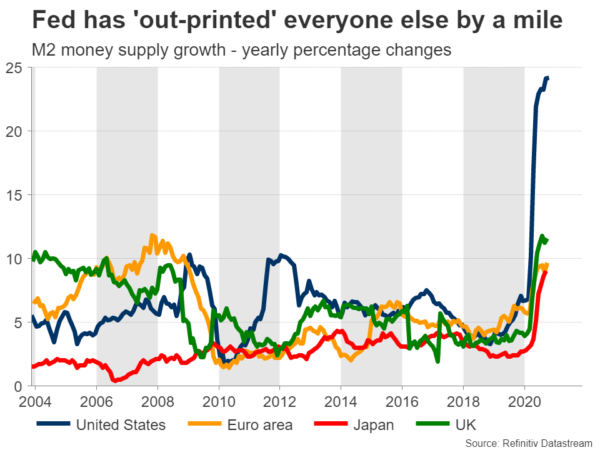 However, this is not the market’s baseline scenario, as the consensus view on Wall Street is for the reserve currency to weaken further in 2021. This thesis is based on the Fed staying dovish for much longer than other central banks, and investors rotating away from US assets and towards foreign ones as the global economy heals.

The world’s oldest safe haven is trading at the lower end of a sideways range for now, between $1850 and $1975, and the Fed could determine whether we break below it or revisit the upper end. In case of a break, buyers could resurface around the $1800 region, though the $1750 zone seems stronger technically.

In the bigger picture, we may be entering a period of higher inflation, but central banks are unlikely to take their foot off the pedal, which sets up a favorable environment for bullion next year. The joker is what happens to the dollar.