Economic developments since the June meeting suggest that BOC would still maintain an upbeat tone and taper further at this week’s meeting. Policymakers will, however, maintain the forward guidance that the first rate hike would come in 2H22. The staff will also release the latest economic projections. The GDP growth outlook will be kept largely unchanged but inflation forecasts should be upgraded significantly.

The disappointing GDP data in the first quarter is not a concern for policymakers. Recall that GDP expanded grew at an annualized +5.7% q/q in 1Q21, missing BOC’s forecast of +7%. Despite this, Deputy Governor Timothy Lane noted on June 10 that the report was “quite encouraging” as household consumption came in strong than expected. GDP contracted -0.3% in April, following 11 consecutive monthly increases. The reading came in better than the initial estimate of -0.8%. Preliminary information indicates a decrease in real GDP of approximately 0.3% in May.

Strong market sentiment, solid employment data, together with satisfactory vaccination rollout signaled that optimism is warranted. As suggested in BOC’s Business Outlook Survey (BOS), the BOS indicator hit a record high of 4.17 in 2Q21, compared with 2.95 previously. The strong improvement was not only driven base effects, but also by less uncertainty from the pandemic. Meanwhile, the Survey of Consumer Expectations revealed that consumers expected +3% inflation across all time horizons. Meanwhile, 86% of businesses expected inflation to exceed +2% over the next 2 years, with a record 35% above +3%. 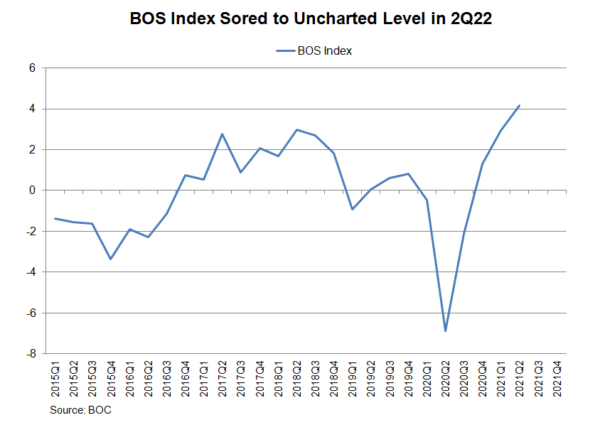 On the job market, the unemployment rate dropped -0.4 ppt to 7.8% in June. The participation rate increased to 65.2% from May’s 64.6%, signaling higher confidence over the employment market. The number of payrolls increased +230.7K, beating consensus of a +195K addition and May’s decline of 68K.

Encouraging economic developments support the BOC’s tapering plan. We expect policymakers to further reduce weekly asset purchases to CAD 2B, from CAD 3B previously. In June, the central bank projected the first rate hike 2H22. This should remain intact in July. 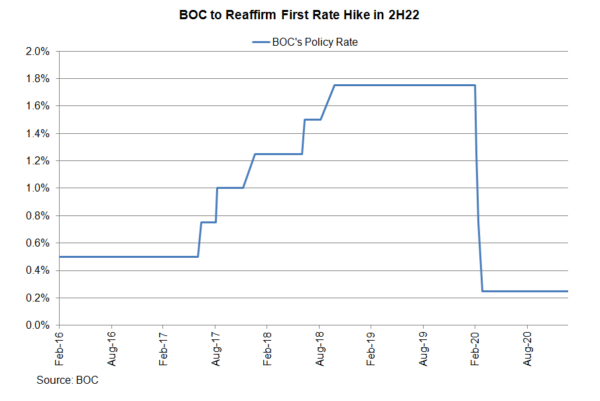