Since the Jackson Hole symposium and the FOMC minutes, the pandemic has worsened in the US, while economic growth appears to be losing steam. These suggest that all monetary policy measures will stay unchanged with asset purchases staying at US$120B per month and the Fed funds rate target at 0-0.25%. We don’t expect any breakthrough news about QE tapering. The Fed would likely reiterate that it could happen some time this year, without making formal announcement. The updates on the median dot plot will draw close attention. This whole picture could be different with only one or two members change views. The Fed’s staff will also release the latest economic projections at the meeting. 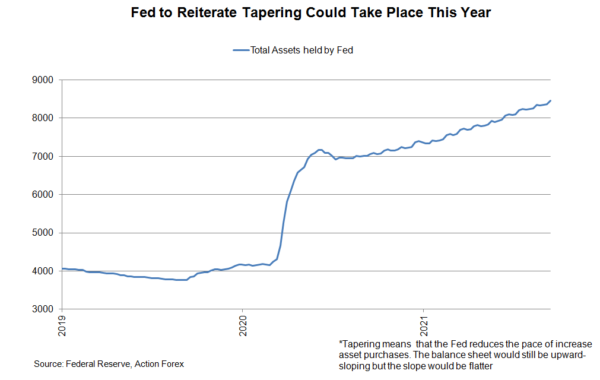 Economic recovery has shown signs of moderation. Nonfarm payrolls increased +235K in August, much weaker than consensus of +750K and +1053K in July. The unemployment rate slipped -0.2 ppt to 5.2%, in line with expectations. On inflation, headline CPI eased to +5.3% y/y in August, from +5.4% a month ago. However, it remains more than double of the Fed’s target. Core CPI, which excludes food and energy prices, slowed to +4% y/y in August, from July’s +4.3%. On a positive note, household spending remains firm. Retail sales surprised to the upside, gaining +0.7% m/m in August, after a -1.8% drop in July. This was probably helped by wage increase. Average hourly earnings expanded +4.3% y/y from +4.1% in July. This exceeded consensus of a +4% gain. Against this backdrop, the Fed’s staff could slightly revise lower GDP growth forecast for this year. The projection of inflation should, however, be upgraded. 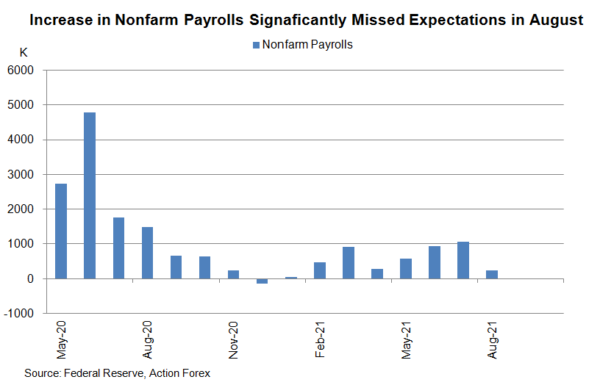 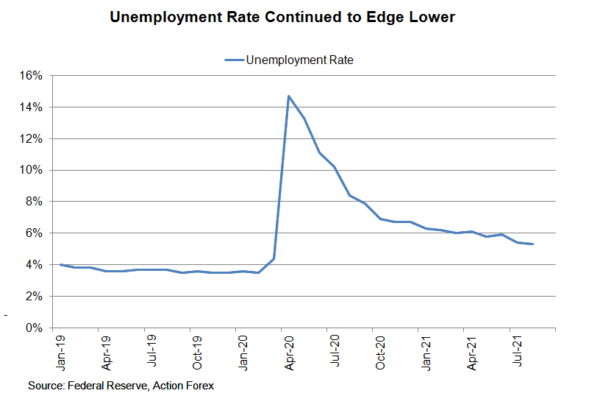 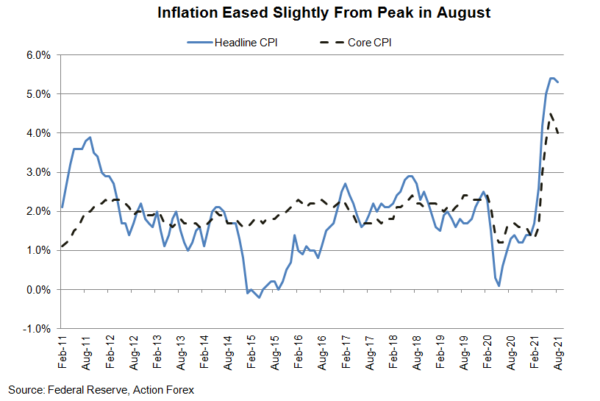 There is no urgency for the Fed to rush into making a formal announcement of QE tapering this month. Yet, Fed Chair Jerome Powell should reiterate the stance that “substantial further progress” has been “met for inflation”, and “there has also been clear progress toward maximum employment”. He would likely reiterate that “if the economy evolved broadly as anticipated, it could be appropriate to start reducing the pace of asset purchases this year”.

The median dot plot would be an important highlight of the meeting. Back in June, the median dot plots projected two rate hikes by 2023. Even in 2022, there were 7 out of 18 participants anticipating one or two hikes in 2022, up from only four in March. Things can turn more hawkish if one or two more members bring their forecast forward to 2022. Meanwhile, the median projection could shift to three hikes if just two members lift their target from 0.50% to 0.75%.