Strengthening against US dollar for 8 consecutive months, Renminbi (Chinese yuan) has accumulated gains of about 10% since June 2020. We believe the rally is overextended as China’s economic recovery has shown signs of losing steam while yield differential between US and China has narrowed over the past few months.

Recovery in China is losing momentum

As a country dependent heavily on exports, growth is unsustainable if other economies (especially the US which is the largest consumers of Chinese exports) fail to perform well. The inflation report released last week reveals that domestic demand is not as strong as anticipated. China fell to deflation with the headline CPI contracting -0.3% y/y in January, missing consensus of 0%. Non-food inflation contracted -0.8% y/y, worsening from December’s 0%. Core inflation (headline CPI excluding food and energy) has been subdued. It even eased further to the negative territory (-0.3% y/y) in January, from +0.4% in December. By contrast, PPI inflation turned positive, the first time since February 2020, at +0.3% y/y in January. The February data will be distorted by Lunar New Year holidays. In the months ahead, the country’s inflation outlook should remain soft.

Leading indicators have suggested that the momentum of recovery in losing momentum. Caixin’s manufacturing PMI fell to a 7-month low of 51.5 in January from 53 a month ago. the market had anticipated a milder drop to 52.7. While staying in the expansionary territory (above 50), the decline was quite rapid and indicated that growth in the sector is losing steam. Concerning the sub-indices, growth in both output and new orders decelerated, while export sales shrank for the first time in 6 months. The official manufacturing PMI published by the national bureau of statistics also slipped -0.6 point to 51.3 during the month. 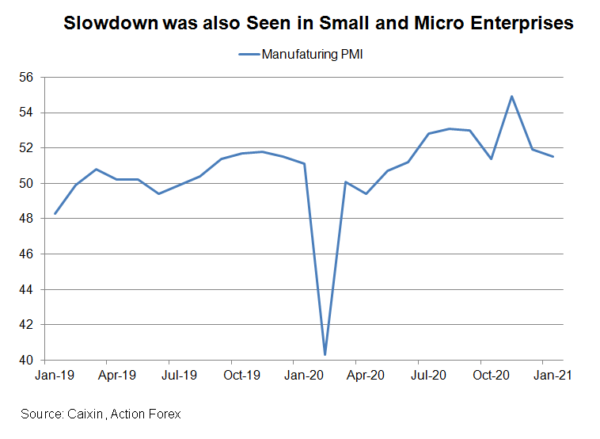 Exchange Rate Not Yet Reacted to Narrowing Yield Differential

PBOC has kept it policy rate (the 1-year loan prime rate) unchanged at 3.85% since April 2020. It has also not adjusted the reserve requirement ratios since mid-2020. At the quarterly monetary report, the central bank pledged to maintain a prudent and flexible monetary policy for the year ahead. It will also provide enough support to the economy if needed. However, we expect further rate cut would be unlikely, if the pandemic is under control and the global economic recovery gathers momentum.

The Fed is expected to keep the Fed funds rate low for the years ahead. As previous FOMC meetings, the central bank has also maintained the QE program at the size of US$120B per month. Market speculations of tapering have increased over the past months. While officials have shrugged off the idea, US yields have improved of late. Monetary policy divergence, reflective in yield differentials, is an important driving force of exchange rate. Over the past year, weakness in US dollar has been driven by the Fed’s dovish shift in the monetary policy stance. Weakness in USDCNY was also parallel with widening US-China yield differential. This relationship appears to have broken since October last year, mainly because the recovery has been stronger and the coronavirus situation is more stable in China than in the US. We believe the selloff in USDCNY is overextended. A rebound is needed to reflect the slowdown in Chinese growth and narrowing yield differential.

Dollar Index Falls to the Lowest in Nearly Three Months on...