Dollar is trading as the strongest one as partly helped by the post ECB selloff in Euro. In part, there were delayed reactions to the hawkish Fed announcement too, which indicates it will hike two more times this year. The greenback in extending it’s strong, broad based gains in Asian session today, in particular, against commodity currencies. But whether Dollar could end the week as the strongest would depend on market reactions to announcement of Section 301 tariffs against China.

Technically, USD/CAD has breached a key resistance level at 1.3124 which affirms medium term bullishness. Development in other Dollar pairs are also suggesting up trend resumption. But more is needed to confirm. 1.1509 support in EUR/USD, 1.3203 support in GBP/USD, 1.0056 resistance in USD/CHF are the key levels to watch today.

Trump approved Section 301 tariffs on USD 50B of Chinese imports

It’s reported that Trump has approved the Section 301 tariffs on USD 50B in Chinese imports and the formal announcement would be made today. That came after a 90-minute meeting with the core team of senior White House officials, national-security officials and senior representatives of the Treasury, Commerce Department, Trade Representative’s Office. The initial proposal include around 1,300 lines of products targeting the “Made in China 2025” plan. But it’s uncertain what changes would be made to the list after public hearing. Also, it’s uncertain when the tariffs will come into effect.

China has pledged retaliation yesterday if the tariffs are enforced. Foreign Minister Wang Yi warned yesterday that China and the US faced a choice between cooperation and confrontation. Wand said “China chooses the first”. But “of course, we have also made preparations to respond to the second kind of choice.”

The urged the Congress to “convince the administration to halt tariffs and go back to the negotiating table.” And, Under the hashtag #TradeNotTariffs, members of these organizations are also raising awareness on social media by sharing with the public what tariffs could mean for their livelihoods – and how severe that outlook could be.

This is an immediate response to the news that White House would announce the final list of tariffs on USD 50B in Chinese goods. Chinese has announced a retaliation list several months ago that include 25% tariffs on US soybeans. ASA described the Chinese retaliation as “devastating to growers of the number one US agricultural export.” NAWG said “adding a 25 percent tariff on exports to China for US wheat is the last thing we need during some of the worst economic times in farm country.”

NCGA warned farmers “cannot afford the immediate pain of retaliation nor the longer term erosion of long-standing market access and economic partnerships with some of our closest friends and allies.” AEM also said “we strongly oppose a trade war with China because no one ever wins in these tit-for-tat dispute”.

Here is the full release.

IMF warned of US fiscal and trade policies

IMF saw a positive picture of the US economy in a report released yesterday, but warned of fiscal and trade policy. IMF said that near-term outlook for the U.S. economy is one of strong growth and job creation. And, a slow but steady rise in wage and price inflation is expected as labor and product markets tighten. It projects US economy to grow 2.9% In 2018 and 2.7% in 2019 but slow sharply to 1.9% in 2020. Core PCE is projected to hit 2.0% in 2018 and accelerate to 2.3% in 2019 before slowing back to 2.2% in 2020.

Regarding fiscal policy, IMF warned that the combined effect of the administration’s tax and spending policies will cause the federal government deficit to exceed 4.5% of GDP by 2019. And, such a procyclical fiscal policy will elevate the risks to the U.S. and global economy. The risks include higher public debt, a inflation surprise, international spillover, future recession and increased global imbalances. IMF said Fed will need to raise policy rates at a faster pace to achieve its dual mandate. And policymakers should be ready to accept some modest, temporary overshooting of its medium-term inflation goal

On trade, IMF warned that the measures to impose new tariffs or otherwise restrict import “are likely to move the globe further away from an open, fair and rules-based trade system, with adverse effects for both the U.S. economy and for trading partners”. Risks include:

Euro recovers mildly after yesterday’s post ECB selloff. But for now, it’s trading down against all other major currencies except Australian Dollar. ECB announced yesterday that the current EUR 30B per month asset purchase program will continue to run as planned till the end of September. Then, the monthly size will be tapered to EUR 15B, subject to incoming data. The program will then run till the end of December 2018 and end there. Market responded negatively to the forward guidance that interest rates will remain at their present levels at least through the summer of 2019

BoJ left monetary policy unchanged today as widely expected. Under the yield curve control framework, short term policy rate is held at -0.1%. BoJ will also continue target to keep 10 year JGB yield at around 0%. Annual pace of JGB purchase is kept at around JPY 80T. Goushi Kataoka dissented again in a 8-1 vote. Kataoka pushed to “further strengthen monetary easing” so that “yields on JGBs with maturities of 10 years and longer would broadly be lowered further.”

The description on the economy is largely unchanged. One exception is that CPI is now “in the range of 0.5-1.0%”, comparing to April’s description of  moving around 1 percent. On the outlook, BoJ noted that the economy is “likely to continue its moderate expansion.” Domestic demand will follow an uptrend while exports will continue the moderate increasing trend. Risks to the outlook include the following: the U.S. economic policies and their impact on global financial markets; developments in emerging and commodity-exporting economies; negotiations on the United Kingdom’s exit from the European Union (EU) and their effects; and geopolitical risks.

New Zealand Business NZ manufacturing PMI dropped to 54.5 in May, down from 59.1. Eurozone will release trade balance, labor costs and CPI final in European session. Later in the day, Canada will release international securities transactions and manufacturing sales. US will release Empire State manufacturing index, industrial production and U of Michigan sentiment. 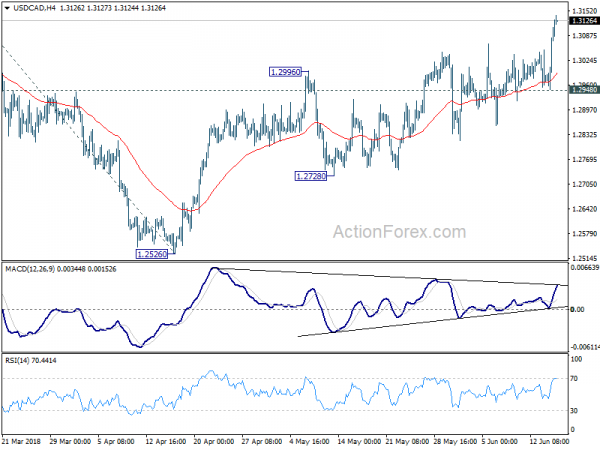 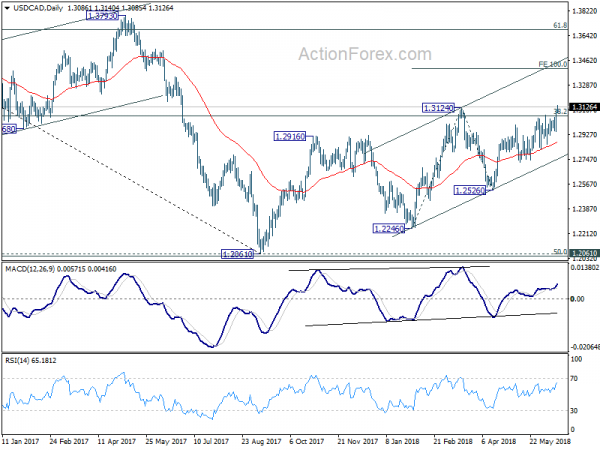