Dollar selloff continues today as full-blown trade war fear receded. Yen follows as the second weakest on return of global risk appetite. Euro’s strongest pace was overtaken by Swiss Franc and Canadian Dollar. The Loonie is awaiting the Canadian Foreign Minister Chrystia Freeland’s visit to Washington. But so far, overall signs are positive. In other markets, FTSE is trading up 0.46% while DAX is up 0.30% at the time of writing. But both are kept well below day high made earlier in the session. On the other hand, CAC picks up solid momentum as the session goes and is up 0.42%. Gold is firm above 1210 thanks to Dollar’s weakness.

Whether it’s still named NAFTA or now US-Mexico Trade Agreement, the deal showed that Trump backed down from his demand of sunset clause. And it’s a signal that he’s ready for more concessions in negotiation with Canada as well as the EU. The threat of auto-tariffs on the closest allies of the US is materially reduced. Also, no matter how hard he sounds, Trump is facing tremendous domestic political and business pressures to include Canada into the deal eventually. We’ll see how it goes.

Talking about trade, US trade deficit widened to USD -72.2B in July, up from USD -67.9B and larger than expectation of USD -68.6B. US Wholesale inventories rose 0.7% mom in July. Released earlier today, Eurozone M3 money supply rose 4.0% yoy in July.

US Mnuchin: We’ll try to get Canada on board quickly

US Treasury Secretary Steven Mnuchin said in an interview that the US-Mexico Trade Agreement is a “great move forward for trade”. Meanwhile, he, as perceived as a trade dove, added that “our objective is to try to get Canada on board quickly”. Mnuchin also acknowledged that “this is a great deal for American workers. If you remember one thing, this deal is about more trade for U.S. companies and goods and services, and that’s what we’re focused on.”

Regarding China, Mnuchin said that “We’ve been very clear. We need better market access to China we need reciprocal trade”. And, “these are issues that our allies in the G-7 agree with us on.”

The San Francisco Fed released an interesting economic letter titled “Information in the Yield Curve about Future Recessions” yesterday. There is noted that yield curve inversion has been a “reliable predictor of recessions”. However, the difference between ten-year and three-month Treasury rates is the most useful term spread for forecasting recessions. That is, not the ten-year and two-year yield spread that’s most referred to.

Also, the letter noted that currently, the ten-year and three-month spread is still at a “comfortable distance from a yield curve inversion.” If the paper reflects the norm of FOMC member’s thoughts, the yield curve flattening shouldn’t be much of a curve for keeping rate hikes continue.

In a speech titled Monetary and Macroprudential Policy Interactions, ECB chief economist Peter Praet said that the central bank’s monetary policy has been “effective in stabilising the euro area economy and creating conditions for a sustained adjustment of inflation towards below, but close to, 2% over the medium term.” But for now, “patient, prudent and persistent monetary policy is still needed” for the Eurozone right now.” And, at the same time and in particular at this stage of the monetary policy cycle, “the risk channel of our policy has to be closely monitored”.

Praet also explained that monetary policy enhances financial stability by “smoothing business cycles and keeping inflation expectations anchored”. Also, it provides “liquidity to solvent institutions in stressful situations.” However, as monetary policy operates amid uncertainty, “miscalibration is a possibility”. And Financial stability risks “mostly arise when the chosen policy interacts with distorted incentives in the financial sector” that “that lead to excessive leverage and maturity transformation, and funding fragilities”.

UK PM May: No-deal Brexit is not the end of the world

UK Prime Minister Theresa May cited endorsed remarks by Roberto Azevêdo, the director general of the World Trade Organization regarding no-deal Brexit. May said, a no-deal situation “will not be a walk in the park, but it wouldn’t be the end of the world”. May added that “what the government is doing is putting in place the preparation such that if we are in that situation, we can make a success of it, just as we can make a success of a good deal.”

Chancellor of Exchequer Philip Hammond warned last week that a no-deal Brexit would costs UK GBP 80B in extra borrowing and inhibit long term growth. But May tried to talk that down and said the figures dated back to January and “they were a work in progress at that particular time.” Regarding the time frame of Brexit negotiation, May said “we are all working to the October deadline” because “from our point of view there is some legislation we have to get through parliament”.

Separately, German Foreign Minister Heiko Maas said “Regrettably, a hard Brexit is not off the table.” French Prime Minister Edouard Philippe also “tasked ministers to prepare contingency measures that would be necessary … to mitigate the difficulties linked with this unprecedented challenge”.

USD/CAD’s decline accelerates to as low as 1.2894 so far today. Intraday bias remain son the downside for 1.2879 fibonacci level first. Sustained break there will add to the case of medium term reversal and target next fibonacci level at 1.2567. On the upside, above 1.2981 minor resistance will turn intraday bias neutral first. But for now, near term outlook will stay cautiously bearish as long as 1.3173 resistance holds. 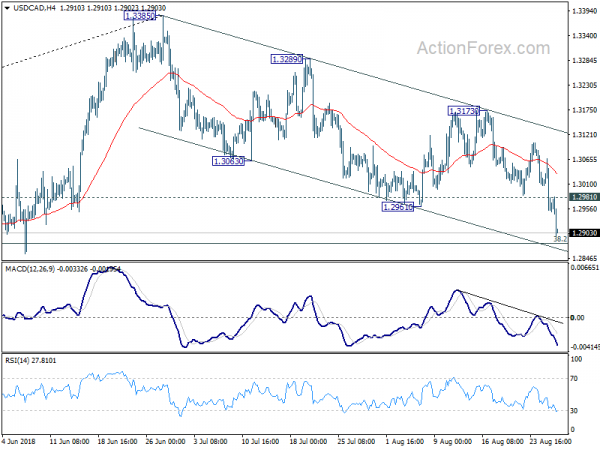 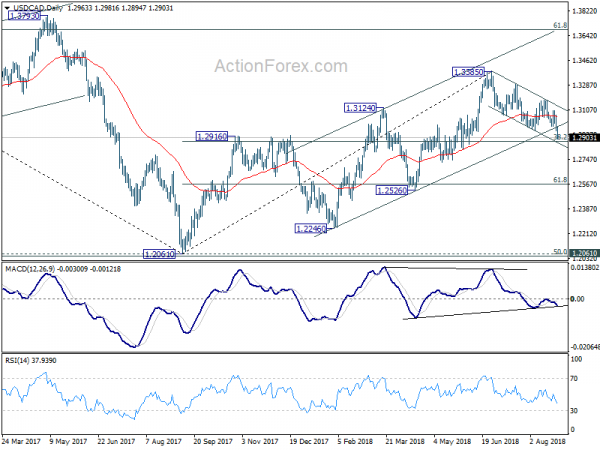 Canada’s Economy Rebounded In May

Weekly Economic and Financial Commentary: The Second Wave Appears to Have Crested

The Weekly Bottom Line: Historical Decline in GDP As Virus Struck in Q2

Forward Guidance: Growth in Employment to Continue in July, at a Slower Pace

Week Ahead – Can Non-Farm Payrolls Halt the Dollar’s Descent?