Dollar jumps sharply today as markets responded positively to comments from Fed official. Also, as political risks in Europe subsides, traders are getting more certain that Fed will hike in June. Indeed, Fed fund futures are now pricing in 87.7% chance of a June hike, comparing with 67.5% a week ago. Dollar index reaches as high as 99.55 so far today and the break of 99.46 resistance is seen as an indication of near term reversal. Meanwhile, the Japanese yen is trading as the weakest major currency, together with Swiss Franc, as markets are back into risk seeking mode. FTSE, DAX and CAC are all trading mildly higher after yesterday’s brief pull back. US futures also point to higher open as NASDAQ and S&P 500 could extend the record runs.

Dollar index in near term reversal

Dollar index’s break of 99.46 resistance should confirm near term bottoming at 98.54, after drawing support from lower trend line. The development is so far in line with our view that price actions from 103.82 are merely a consolidation pattern. Judging from the current structure, it’s likely a triangle (or a falling wedge as some may call it). Immediate focus is turned back to 55 day EMA (now at 100.01. Sustained break there will now raise the chance that such correction is completed. And in that case, we’ll see further rally to 101.34 resistance for confirmation.

Cleveland Fed Mester: Be very vigilant against falling behind

Cleveland Fed President Loretta Mester said yesterday that Fed had already met the "maximum employment" part of the duel mandate. Meanwhile, inflation is also "nearing our 2 percent goal". To her, risks are "roughly balanced" and she urged to be "very vigilant against falling behind" and there should be no delay in further policy tightening. She warned that "if we delay too long in taking the next normalization step…we could risk a recession." Mester also sounded trying to talk down Q1 weakness as she said "although we live in a high-frequency world, we cannot overreact to transitory movements in incoming data." And she expects a "rebound in consumer spending over the rest of the year".

In UK, latest poll by ICM published yesterday showed that Prime Minister Theresa May’s Conservatives is having a record 22 point lead of opposition Labour. It’s believed that May will continue with her campaign in securing strong mandate for Brexit negotiation. In particular, May would see newly elected French President-elect Emmanuel Macron’s landslide victory as a strong sign of unity in France and EU. And as May said, "he was elected with a strong mandate which he can take as a strong position in the negotiations. In the UK we need to ensure we’ve got an equally strong mandate and an equally strong negotiating position. And every vote for me and my team will strengthen my hand in those Brexit negotiations."

Meanwhile, focus will also be on BoE Super Thursday this week. While no change in policies is generally expected, a focus will be on the vote split. It should be reminded again then Sterling launched this round of rally against Dollar and Euro after Kristin Forbes surprised the markets by voting for a rate hike back in March. MPC hawks could look through Q1 growth weakness and instead got more nervous with headline CPI back in target range at 2.3% yoy in March. Also, markets are only pricing in less than 60% chance of any move by BoE before end of 2018. There is much room for a hawkish twist in BoE’s announcements this weak that could lift Sterling further.

USD/JPY’s rally accelerates to as high as 114.10 so far today. The development is in line with our view that correction from 118.65 has completed with three waves down to 108.12. Intraday bias remains on the upside for 115.49 resistance next. Firm break there will now resume larger rally from 98.97 to 125.85 high. On the downside, below 113.04 minor support will turn bias neutral and bring consolidations before staging another rally. 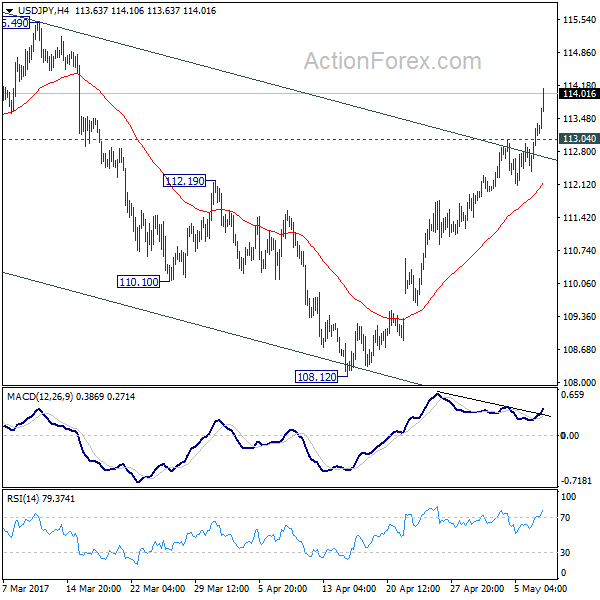 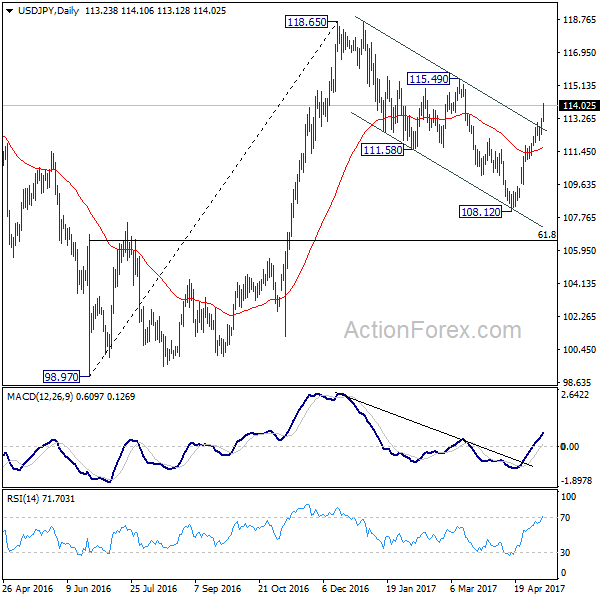