Technically, there is no clear sign that Dollar is bottoming, except possibly versus Yen. The greenback might need to seek help from stabilization in US stocks, if that happens today, to find its footing.

In the regional outlook report released today, IMF downgraded Asia growth forecasts in 2019 due to financial market stress and trade tensions. But it maintained that “near-term outlook for Asia remains positive, supported by steady global momentum and broadly accommodative policies”. Also, “Asia continues to be the main growth engine of the world”.

US Treasury not to name China a currency manipulator, just keep it in monitoring list

There are media reports came out yesterday saying that US Treasury is not going to name China a currency manipulator in the upcoming report to be released later in the month. Though China will remain on a monitoring list due to the huge trade surplus with the US.

That could put Treasury Secretary Steven Mnuchin under even bigger pressure from Trump and the trade hawks in his administration. Mnuchin is clearly the one who preferred to and tried to line up restart of negotiation with China. But he has been receiving cold shoulders from his colleagues.

And Trump seemed to have gotten impatient with Mnuchin. If should be reminded that Trump didn’t just complained Fed for rate hikes. In his words, he said earlier “The problem [causing the market drop] in my opinion is Treasury and the Fed. The Fed is going loco and there’s no reason for them to do it. I’m not happy about it.”

In a Bloomberg interview yesterday, Mnuchin declined to comment and only said “We are concerned about the depreciation” of the yuan, he said, “and want to make sure that it’s not being used as a competitive devaluation.

China exports to US grew despite trade war, imports shrank for another month

China’s trade surplus surprisingly widened in September, as trade surplus with US jumped to record high at USD 34.1B. As trade war started and escalated to another phase, exports to US continued to grow while imports from the US contracted for another month. For the year as a whole, China continued to have faster import growth with EU, than exports.

For the month of September

From January to September

USD/CAD failed to break through 1.3081 resistance and retreats with 4 hour MACD crossed below signal line. Intraday bias is turned neutral again. On the upside, decisive break of 1.3081 will be the first sign of completion of whole choppy fall from 1.3385. In that case, near term outlook will be turned bullish for 1.3225 resistance for confirmation. On the downside, below 1.2886 minor support will turn bias to the downside for 1.2781 first. 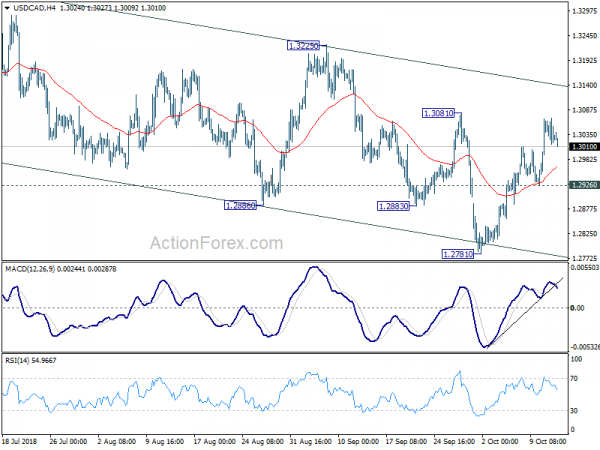 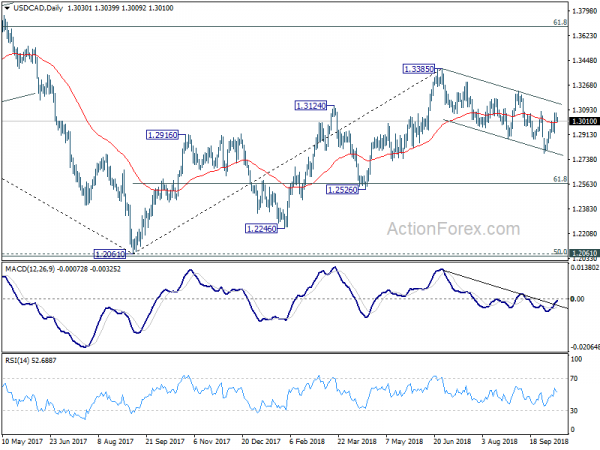