Dollar rally lost some momentum as markets are concerned that US President Donald Trump’s firing of FBI Director James Comey could delay his tax reform. In a controversial move, Trump abruptly fired Comey who oversaw an FBI investigation into Trump’s tie with Russia during last year’s election campaign. Trump’s tax reform was originally targeted at approval by the Congress by August. It was already delayed after the healthcare act failure. Markets are concerned that there will be more distraction to Trump ahead and further slow down the progress on tax reforms.

Also there are concerns that Trump’s move would further reduce the support from fellow Republicans. Some prominent ones like Senator Jeff Flake said he cannot find any rationale for doing so. Armed Services Chairman John McCain said the removal of Comey confirmed the "need and urgency" for a special congressional investigation on Russia’s interference in the election. A former chief White House ethics lawyer to George W Bush also criticized the case as an "abuse of power".

According to a ECB study, wage growth has been unexpectedly weak and unemployment in higher than what the official data suggest. The adjusted labor market slack is around 15%, well above the official 9.5% unemployment rate. The study noted that "in France and Italy, broader measures of labour market slack have continued to increase throughout the recovery, while in Spain and in the other euro area economies, they have recorded some recent declines, but remain well above pre-crisis estimates." And, "the level of the broader indicator of labour underutilisation is still high, and this is likely to continue to contain wage dynamics."

BoJ might release calculations on impact of stimulus exit

BoJ Governor Haruhiko Kuroda said today that BoJ might release the details of the study of stimulus withdrawal and the impact on its balance sheet. And he emphasized that "it is very important to explain in easy-to-understand terms how monetary policy could affect the BOJ’s financial health". Regarding monetary policies, Kuroda said that he’s "not thinking about changing the policy mix right now". And "the amount of our bond purchases may vary depending on financial market conditions at the time. But this has no implications for monetary policy going forward." Regarding the economy, Kuroda said that "while global economic growth is gaining momentum, various uncertainties remain".

In the summary of opinions of BoJ meeting, board members believed that current massive policy accommodations are warranted because of downside risks from overseas. Nonetheless, as export and production outlook improved, it was appropriate to raise economic assessment.

China’s headline CPI accelerated to 1.2% yoy in April, up from 0.9% a month ago, as mainly driven by the recovery of food disinflation. Food price contracted -3.5% yoy, following a -4.4% drop in March. Non-food inflation rose to 2.4% yoy in April from 2.3% a month ago. Core inflation (excluding food and energy) improved to 2.1% yoy from 2% in March. Such level should be in line with the government’s target. PPI moderated to 6.4% in April from 7.6% in March. The deceleration came in more than expectations. A key contributor to the slowdown was commodity prices which slowed further in April as low base effects dissipated. Global prices also pulled back after the strong rally earlier in the year. More in China’s PPI Inflation Fell Further From High Level.

Kiwi extends rally ahead of RBNZ

RBNZ rate decision will be a focus in the upcoming Asian session. The central bank is widely expected to keep interest rate unchanged at 1.75%. New Zealand Dollar strengthens broadly this week as markets are expecting an upbeat statement by RBNZ after recent economic data. In particular, headline inflation already jumped to 2.2% yoy. And, some economists expected inflation to stay above 2% level through 2017 and 2018. Opinions are divided on when RBNZ would hike, ranging from Q1 in 2018 to Q4 in 2018.

USD/JPY is losing some upside momentum as seen in 4 hour MACD. But with 113.04 minor support, intraday bias remains on the upside for the moment, for 115.49 resistance next. Outlook remains unchanged that correction from 118.65 has completed with three waves down to 108.12. Break of 115.49 will resume larger rally from 98.97 to 125.85 high. On the downside, below 113.04 minor support will turn bias neutral and bring consolidations before staging another rally. 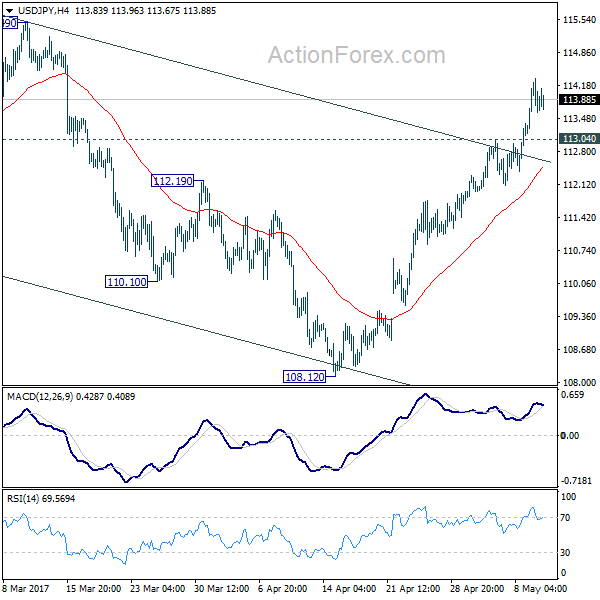 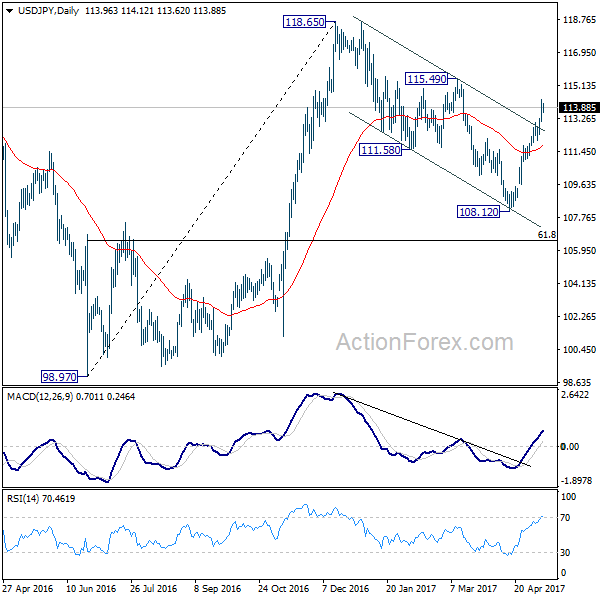