The forex markets open the week rather steadily. New Zealand Dollar trades mildly higher after better than expected retail sales data. Canadian Dollar is also lifted mildly by rebound in oil price, which sees WTI back at 48.60, comparing to this month’s low at 43.76. The Japanese Yen shows little reaction to another missile launch by North Korea while markets await the result of an emergency UN security meeting. Euro also shows little reaction to German CDU’s win in an important state election. Meanwhile, UK is stepping up its rhetoric ahead of the Brexit negotiation. The focus of the week, though, will be on data from UK, Eurozone, Canada and Australia.

In Asia, North Korea said today that it had successfully conducted a newly development mid-to-long range missile test over the weekend. The official KCNA news agency said that "the test-fire aimed at verifying the tactical and technological specifications of the newly developed ballistic rocket capable of carrying a large-size heavy nuclear warhead." Meanwhile, the Pacific Command of US military said that the type of missile fired was "not consistent with an intercontinental ballistic missile." The US and Japan called for an emergency meeting of the United Nations Security Council on North Korea. The meeting will be held Tuesday afternoon.

CDU won election in the most populous state in Germany

In Germany, Chancellor Angela Merkel’s Christian Democratic Union had an important victory in elections in the state of North Rhine-Westphalia yesterday. The CDU is projected to get 33% of votes. Social Democratic Party came second with 31.4%. Meanwhile, the populist Alternative for Germany got 7.4% percent in their first run for NRW parliament. NRW is the most populous state in Germany and it’s seen as a important indicator for the results in September’s national election. Merkel and CDU are seen as given a strong start to their campaign for September.

In UK, Brexit Minister David Davis criticized that the EU’s format of negotiation is "illogical". He referred to the sequence of talks on dealing with citizen’s rights, border between Northern Ireland and the Republic of Ireland and then a financial settlement. And, after completing that, the discussions on future relationships could start. He especially pointed out that without knowing UK’s general border policy, free trade agreements, there is no way to handle the border of Irelands. Davis also blasted that "the simple truth is that we are leaving, we are going to be outside the reach of the European court."

For the week ahead…

A number of economic data will be released from UK including CPI, employment and retail sales. Headline CPI is expected to jump further to 2.6% yoy in April. Currently, it’s generally expected that BoE won’t act before conclusion of the Brexit negotiation. But the markets would also be keen to see how the inflation numbers turn to to be and how they would stretch MPC member’s tolerance. Meanwhile, Eurozone GDP, German ZEW will also be watched. In Asian pacific, RBA minutes and Australia employment, Japan GDP will be the highlight. Meanwhile, in North American, the main focus will be Canada CPI and retail sales.

USD/CAD dips mildly today but it’s staying in tight range below 1.3793. Intraday bias remains neutral for the moment. Outlook is unchanged that choppy rise from 1.2460 is seen as a corrective move. Hence, in case of another rally, we’d expect upside to be limited by 1.3838 fibonacci level to bring reversal. Meanwhile, break of 1.3534 resistance turned support will suggest that rise from 1.2968 has completed. In such case, intraday bias will be turned back to the downside for medium term channel (now at 1.3176). 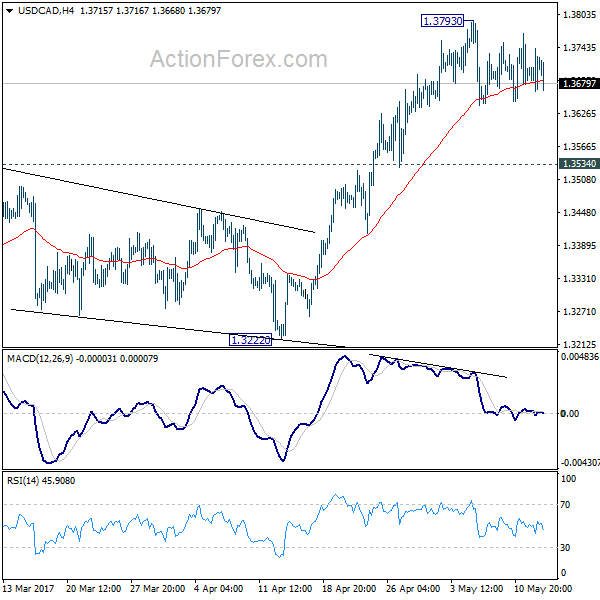 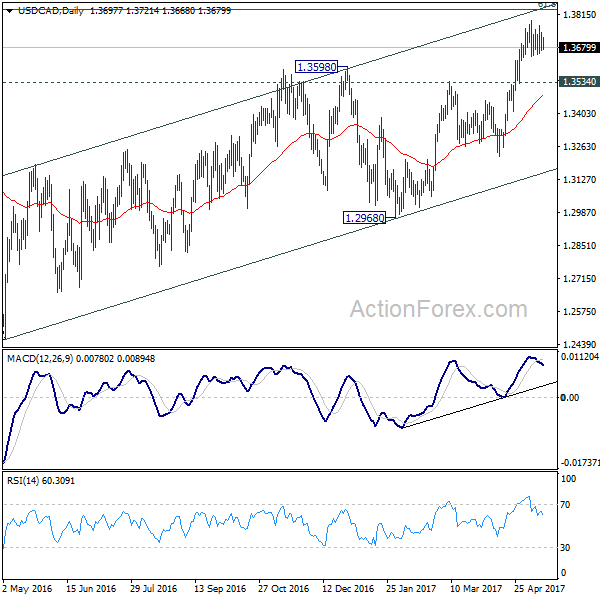