Dollar surged broadly last week as Fed delivered the expected rate hike and painted a more hawkish rate outlook for 2017. Dollar index resumed the long term up trend and reached a 14 year high at 103.56 before closing at 102.95. In particular, EUR/USD took out 1.0461 key support level and reached the lowest level since 2002. Nonetheless, Yen and commodity currencies were hardest hit. Rally in Dollar was accompanied by extended rally in treasury yields as 10 year yield breached 2.6 handle before closing at 2.597. Gold suffered deeper selling on dollar trend to close at 1136.8 while WTI crude oil pared back much of the post OPEC gains to close at 51.90. However, stocks turned mixed despite Fed raising GDP projection for next year. DJIA struggled to power through 20000 handle and closed the week slightly higher at 19843.31. The markets may turn into consolidation mode as holidays approach. But strength in Dollar will likely carry on to early next year.

To recap last week’s central bank activities, Fed increased the policy rate by 25 bps for the first time in a year. While this had been widely anticipated, the ‘dot plot’ indicated that the members expect three hikes in 2017, up from two previously. The accompanying statement was in a hawkish tone, upgrading the assessments to the economic outlook. The members reinforced that ‘near-term risks to the economic outlook appear roughly balanced. Fed Chair Janet Yellen made no hint on how the new fiscal policy would affect the monetary stance. Yet, she stressed there is non-negligible uncertainty regarding the new policy. More in Fed Raised Rates by +25 Bps, Expects Three Hikes In 2017.

Three major European central banks held monetary meeting last week, including BoE, SNB and Norges bank. All left their policy rates unchanged. Moreover, all pointed to higher uncertainty in the global economic outlook. BoE kept its Bank rate unchanged at a record low of 0.25%. The sizes of government and corporate bond purchases also stayed unchanged at435B pound and up to 10b pound, respectively, in December. Policymakers warned that the recent strength in sterling might cool inflation in the medium-term. SNB held deposit rate steady at -0.75%, while Norges bank left kept its deposit rate steady at 0.5%. More in BOE, SNB, Norges Bank On Hold After Fed’s Rate Hike.

10 year yield took out 2.489 key resistance after some hesitations in recent week. The strong break indicates that markets have made up their mind after FOMC meeting last week. Current up trend should extend to 3.036 resistance next in medium term. From the long term perspective 3.036 will now be a key resistance to overcome. But decisive break there will complete a double bottom pattern (1.394, 1.336) will bullish convergence condition in monthly MACD, which will be a strong sign on long term trend change. This could be the defining point in first half of next year.

Dollar index’s up trend has resumed for next medium term target at 61.8% projection of 78.9 to 100.39 from 91.91 at 105.19. A major question in the long term outlook is whether current rise from 91.91 is the fifth wave of the whole rise from 71.69. Normally, in that case, 105.19 could be a strong resistance level which the dollar index would be repelled back through prior resistance at 100.39. However, considering that EUR/USD has just took out 1.0461 support to resume the long term down trend, which will likely break parity easily based on current month. EUR/USD is indeed projected to head to 0.9115 in medium term. Hence, even if the fifth wave scenario holds, Dollar index would still likely extend to 100% projection at 113.40 before making an important top. But in any case, 105.19 is the level to pay attention in first quarter of next year.

Regarding trading strategies, firstly, we’re holding on to our AUD/USD short (sold at 0.7550). The position looked shaky as the consolidation pattern from 0.7310 was longer and stronger than we expected. Nonetheless, while AUD/USD recovered to 0.7523, it was held below our stop at 0.7550. Subsequent sharp fall now affirmed our bearish view. That is, the medium term correction pattern from 0.6826 has completed and long term down trend is resuming for a new low. We will hold on to the short position, lower the stop to 0.7450. 0.7144 support is the first target but we’ll most likely not exit at that point. 0.6826 is the second target in medium term. Stay tuned and we’ll keep updating the strategy every week.

Secondly, EUR/USD dipped to 1.0504 last week and recovered to 1.0669. Then the pair finally dived through 1.0504 support. Our sell EUR/USD on break of 1.0504 was triggered. As noted before, EUR/USD should have resumed the long term down trend from 1.6039. Parity would be the first target but we’re looking at next medium term projection target at 0.9115. To give the down trend a little breathing room, we’ll hold on to EUR/USD short with a wider stop at 1.0670. Meanwhile, we’ll be closely watching EUR/GBP to see if the near term fall from 0.9304 would reverse. And in that case, we “might” switch the position to GBP/USD short. But we’ll just keep an eye there first.

EUR/USD dropped to as low as 1.0365 last week as recent decline resumed. The break of 1.0461 support also indicated larger down trend resumption. Initial bias remains on the downside this week for next near term target at 100% projection of 1.1298 to 1.0518 from 1.0872 at 1.0092, which is close to parity. On the upside, above 1.0524 minor resistance will turn bias neutral and bring consolidations before staging another decline. 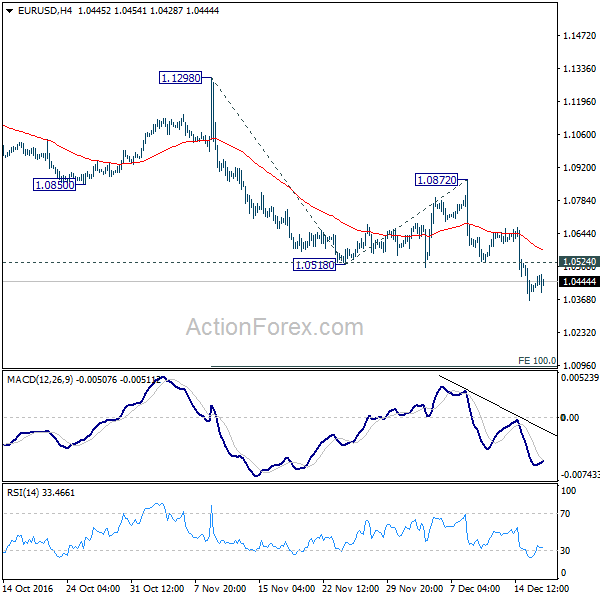 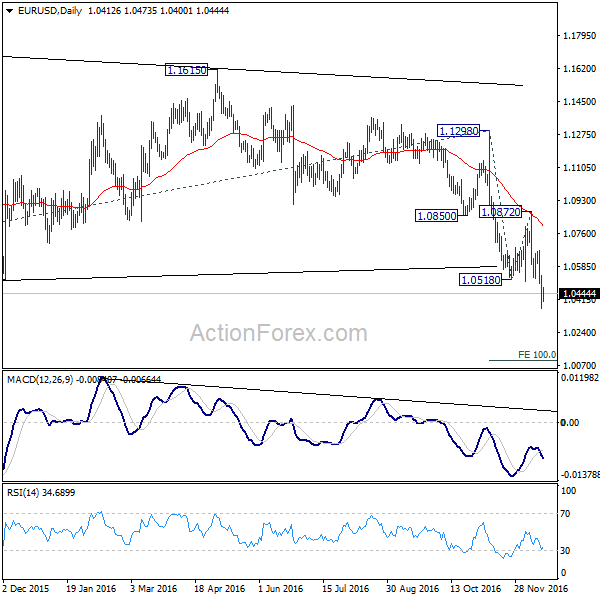 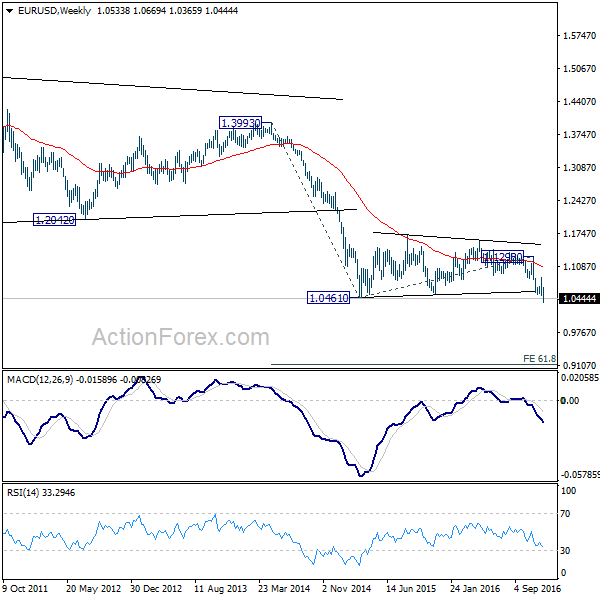 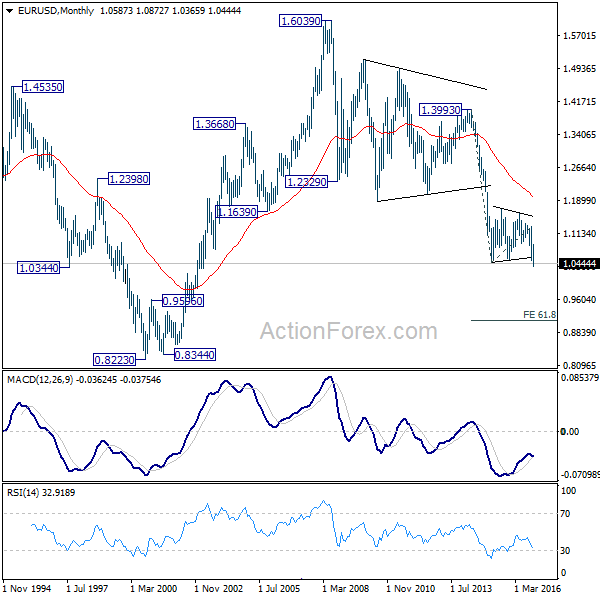