Swiss Franc is clearly the strongest one for today but the underlying reason is not apparent. There is no clear problem in emerging markets. Meanwhile, Euro is indeed following Swiss Franc, as another strong one. Sterling is a bit mixed as there is no new developments regarding May’s leadership challenge, nor on Brexit. On the other hand, commodity currencies are back under pressure as last week’s rally faded.

Technically, while EUR/GBP is strong, there is no follow through buying to break 0.8939 resistance yet. USD/CHF’s fall now put 0.9952 support in progress and bring will be a strong sign of near term reversal. While the greenback looks bad against the Swissy, AUD/USD fails to sustain above 0.7314 resistance and dips back below 0.73 handle. Dollar might be rebounding there. Talking about Aussie, a focus will be 1.5693 minor resistance in EUR/AUD and break will suggest short term bottoming.

UK PM May: The Brexit deal takes back control over borders, money and laws

UK Prime Minister Theresa May said in the CBI annual conference that her Brexit agreement is “a good one for the UK” as it “fulfils the wishes of the British people as expressed in the 2016 referendum”. And she emphasized the outcomes” she wanted to deliver.

Those include “Control over our borders, by bringing an end to free movement, once and for all”; “Control of our money, so we can decide for ourselves how to spend it, and can do so on priorities like our NHS”; “Control of our laws, by ending the jurisdiction of the European Court of Justice in the United Kingdom and ensuring that our laws are made and enforced here in this country.”

At the same occasion, CBI President John Allan said even though May’s Brexit deal is “not perfect”, it “opens a route to a long-term trade arrangement, it unlocks the transition period – the very least that companies need to prepare for Brexit”. And more importantly, he emphasized that ” it avoids the nightmare scenarios a no-deal departure, which would be a wrecking ball for our economy.”

The group’s Direct General Carolyn Fairbairn complained that “Westminster seems to be living in its own narrow world, in which extreme positions are being allowed to dominate.” And, “the result is a high-stakes game of risk, where the outcome could be an accidental no-deal.” She also acknowledged that May’s deal is “not perfect” but a “compromise”, a “hard-won progress”. She urged that “this is not a time to go backward”.

Responding to May’s speech, Fairbairn urged that “future prosperity depends on getting the Brexit deal right. The overwhelming message from business is to make progress, don’t go backwards.” And, “We need frictionless trade, ambitious access for our world-beating services and a transition period which draws us back from the cliff edge. Anything less than that and jobs and investment could suffer.”

UK Brady predicts PM May to win leadership challenge, but 48 threshold not even met yet

As of now, there is no confirmation of enough requests to trigger a no-confidence vote on May yet. Graham Brady, chair of the 1922 Committee, predicted even if there is a leadership challenge, May is going to win it. He said “it would be a simple majority, it would be very likely that the Prime Minister would win such a vote and if she did then there would be a 12-month period where this could not happen again, which would be a huge relief for me because people would have to stop asking me questions about numbers of letters for at least 12 months.”

However, Brady is also dissatisfied with the May’s Brexit deal and branded it as “tricky”. He predicted that “it certainly doesn’t look like the current agreement will get through [the Commons} unless either the agreement changes or the statement of the political declaration, the future relationship, gives considerably stronger grounds for optimism a bout the nature of the final deal.”

Bundesbank said in its monthly report that the -0.2% contraction in Q3 GDP in Germany was due to “a strong temporary one- off effect in the automotive sector.” Meanwhile, “private consumption was temporarily absent as a driving force of the economy”.

However, after that “setback” the German economy is “expected to see fairly strong growth again in the final quarter of 2018”. Bundesbank said output and exports of motor vehicles are “expected to return to normal before the year is out”. And, “manufacturing sector as a whole likewise looks set for marked growth.” “Private consumption is expected to re- assume its role as a major economic driver”. And, “the still outstanding income and labour market prospects are expected to again provide a boost.”

Eurogroup President Mario Centeno hailed that the Franco-German proposal of a Eurozone budget is “breakthrough” on reforms to be discussed among finance ministers in December. Centeno said “the contribution of France and Germany on the euro zone budget is an important topic for today’s discussion,” and, “it can be a sort of a breakthrough toward December”.

Under the joint proposal, the objective of the Eurozone budget is to foster convergence and support reforms “in particular by co-financing growth-enhancing public expenditures such as investments, research and development, innovation and human capital”. The pool of funds from dedicated taxes and individual state contributions would be put under a system of shared management. Members would then be allowed to used the fund for short-term investment plans with approvals from the European Commission. However, the budget would only be available to member states which abide by EUR rules, including deficit and debt.

Italy appears to be unhappy with the proposal as Deputy Prime Minister Matt eo Slovenia warned that “If, as it seems, it (the plan) damages Italy, it will never have our support.”

The pace of normalization would depend on incoming economic data. And three tools are at ECB’s disposal, including reinvestment of assets, interest rate and refinancing operations. Villeroy would prefer slowing the rate of reinvestment only after the first interest rate hike, which wouldn’t happen at least through the summer of 2019.

He also added that “we are not obliged to rush, as early as at our December meeting, to set out the precise length of our reinvestment period.”

BoJ Governor Haruhiko Kuroda noted in a speech that amid a persistent low interest rate environment, “possible changes in the risk appetite and risk profile of banks … is an issue” that BOJ is “highly attentive to”. And, in the short term, “as downward pressure on banks’ profits continues, we need to be mindful of the possible consequences of banks’ engagement in excessive risk taking.”

For banks with “abundant capital bases”, risk taking “provides financial support to firms’ production activities, thereby contributing to economic expansion”. However, without appropriate risk management measures, continued decline in profits would lead to to “insufficient capital bases”, and sharply higher credit costs. The stability of the financial system “could be threatened” in the event of a “large exogenous shock”. Based on October’s Financial System Report, the system has been maintaining stability on the whole.

On monetary, Kuroda repeated the same rhetoric that BoJ will continue with the current loose monetary policy. And, he’s confident that BoJ inflation will eventually move back to target. 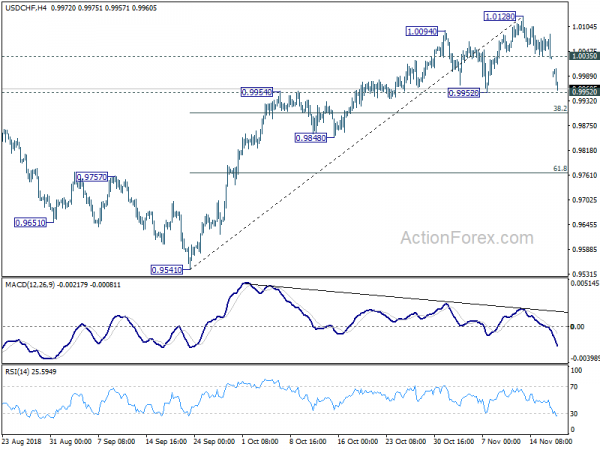 In the bigger picture, the pullback from 1.0067 has completed at 0.9541 already. And rise from 0.9186 is likely resuming. Firm break of 1.0067 will pave the way to retest 1.0342 key resistance. We’d be cautious on strong resistance from there to limit upside to bring another medium term fall to extend long term range trading. However, break of 0.9848 near term support will dampen this view and bring deeper decline back to 0.9541 support and possibly below. 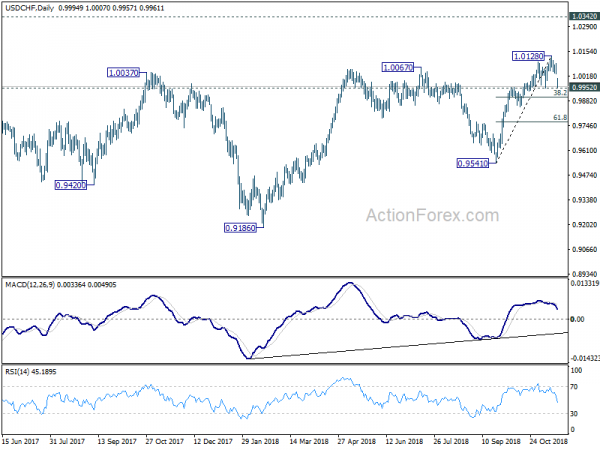