Dollar drifts lower in early US session after comments from US treasury secretary Steve Mnuchin. Regarding the long awaited "phenomenal" tax overhaul, Mnuchin just said that the administration is "primarily focused on a middle income tax cut and a simplification for business." He also reiterated that "any tax cuts for the wealthy getting canceled out with closed loopholes." Mnuchin is aiming to pass the reform before Congress’ recess in August. However, some analysts doubt the possibility of this due to the complex agenda of Congress. Regarding the economy, he noted that Trump’s administration is aiming for "sustainable growth of 3% or more". And the he’s exploring 50- and 100-year debt with "very slight premium".

Regarding Dollar, Mnuchin noted that "strength of the he world, the leading reserve currency, and a reflection of the confidence that kind of people have in the U.S. economy." And, "for longer-term purposes, an appreciation of the dollar is a good thing, and I would expect longer-term, as you’ve seen over periods of time, the dollar does appreciatedollar has a lot to do with kind of where our economy is relative to the rest of the world, and that the dollar continues to be the leading currency in t."

Released from US, initial jobless claims rose 6k to 244k in the week ended February 18, slightly above expectation of 240k. Prior week’s figure was revised down by 1k to 238k. That’s the 103 straight week of sub 300k reading and suggests solid underlying strength in the job market. Continuing claims dropped 17k to 2.06m in the week ended February 11. Also from US, house price index rose 0.4% mom in December

Intraday bias in EUR/USD is turned neutral again on recovery from 1.0493. 4 hour MACD also turned above signal line. Nonetheless, with 1.0678 minor resistance intact, deeper decline is expected. We’re viewing fall from 1.0828 as resuming the larger down trend. Below 1.0493 will target 1.0339 low first. Break will confirm our bearish view and target parity. However, break of 1.0678 will dampen our view and turn focus back to 1.0828 resistance instead. 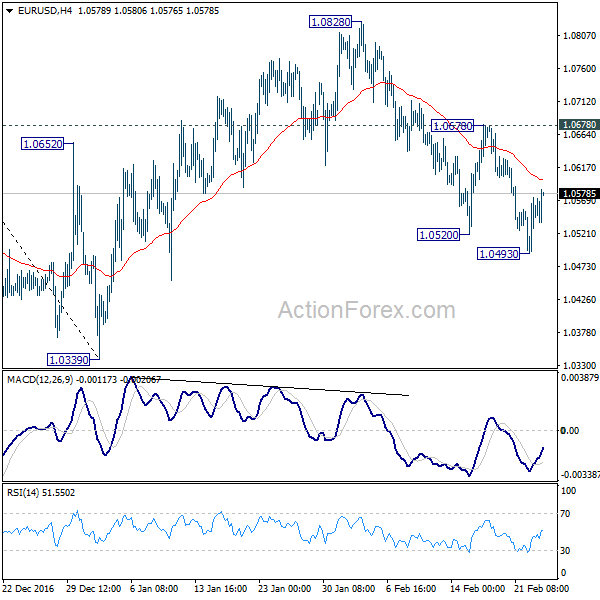 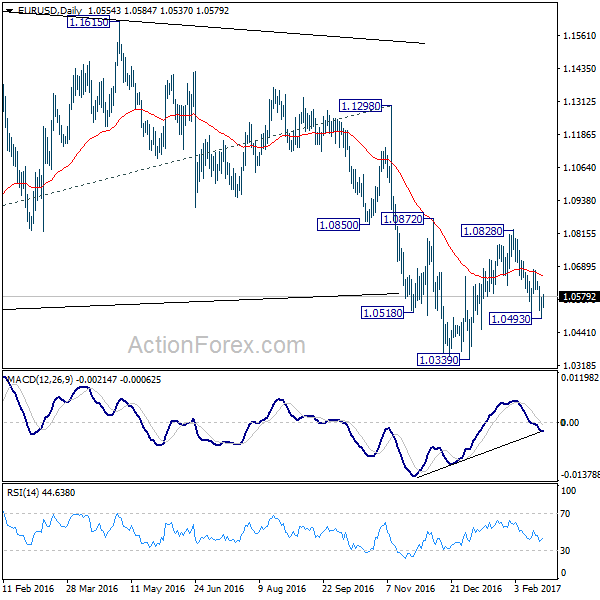