Sterling tumbles sharply and broadly as the UK election is now very likely proved to be a serious blow to Prime Minister Theresa May and the Conservatives. While the Tories would still get the most seats, exit polls showed that it’s going to lose majority and get only 318 seats, down -13 from prior parliament. On the other hand, Labour would probably set 267 seats, up 35. That means UK is now heading to a hung parliament and that is seen by many market participants as the worst case scenario. Much uncertainty would be injected into UK politics, economic policies and most importantly, the Brexit negotiation with EU. And it clearly showed that May’s bold decision for a snap election has backfired and it’s now even uncertain how long May will stay as Prime Minister.

Technically, GBP/USD’s break of 1.2768 support now revived the case of near term reversal. That is rise from 1.2108 has completed at 1.3047 and deeper fall would be seen to 1.2614 key support level. Decisive break there will affirm the view that consolidation pattern from 1.1946 has completed at 1.3047. In such case, the larger down trend from would be resuming for a new low below 1.1946. 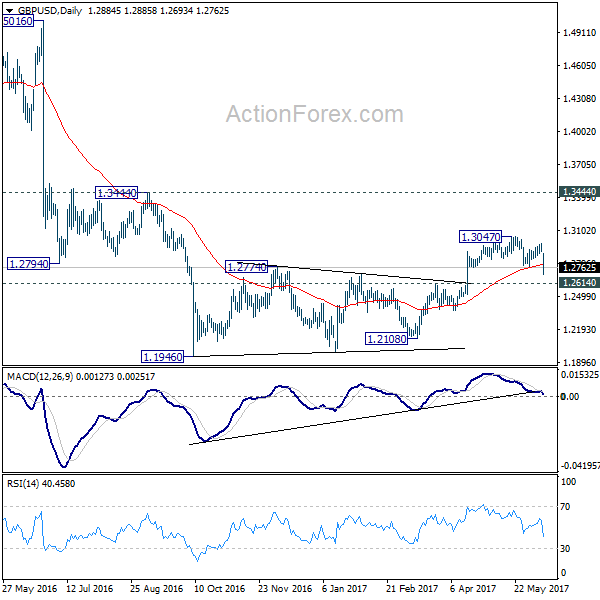 EUR/GBP also resumed recent rise from 0.8312 and took out 0.8786 resistance. Next near term focus is 0.8851 and decisive break there will bring further rally to 0.9304 key resistance. It’s too early to say whether the larger up trend from 2015 low of 0.6935 is resuming. We’ll monitor the structure of the current rise to assess the outlook. 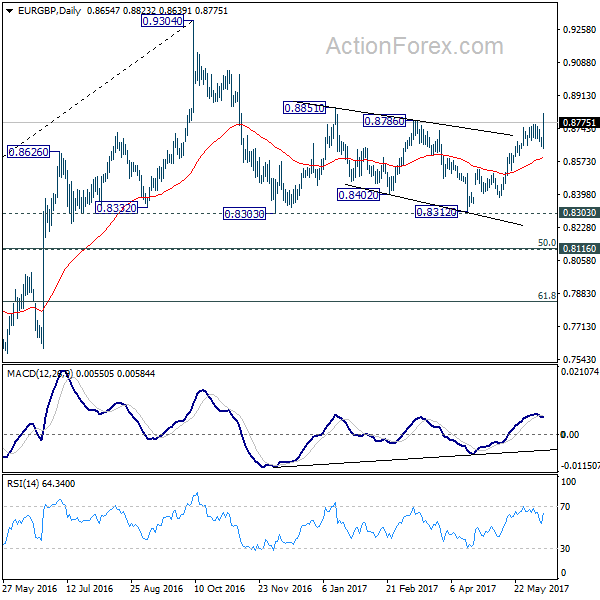 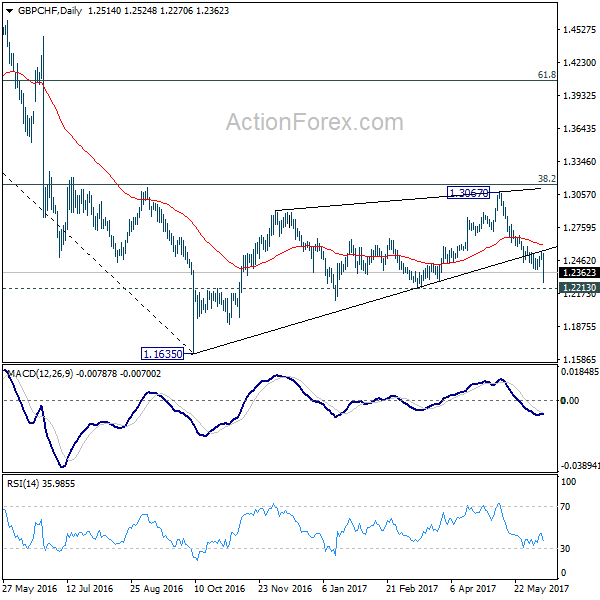 In Eurozone yesterday, ECB President Mario Draghi poured cold water onto hawks who had anticipated a more upbeat policy statement following recent improvement in macroeconomic data. However, the central bank downgraded the inflation forecasts for three years despite upward revision on GDP growth. The forward guidance was slightly less dovish with the reference "or lower" removed. Honestly, all of us understand that, at the currently exceptionally low (some are negative) interest rates, further rate cuts would offer little help to the economy. Notwithstanding expectations that the ECB would begin preparing the market over QE tapering, the central bank maintained the easing bias, reiterating the commitment to accelerate its monthly asset purchases if necessary. More in ECB Refrained from Talking about Tapering, though Noted that Interest Rates Unlikely Lower.

BoJ Governor Haruhiko Kuroda said in a speech at the University of Oxford yesterday that "while the policy approach has steered Japan’s economy in the right direction, our intellectual journey has not yet been completed." He pointed out that "the rate of change in the consumer price index recently has been around 0 percent and there is still a long way to go until the price stability target of 2 percent is achieved." A major reason is that inflation expectations have declined and "have continued to be subdued.

Japan M2 rose 3.9% yoy in May. China CPI accelerated to 1.5% yoy in May, PPI slowed to 5.5% yoy. Australia home loans dropped -1.9% in April. German trade balance UK productions and trade balance will be the main focus in European session. Canada will release employment data in US session.

GBP/USD’s decline from 1.3047 resumed by diving through 1.2768 to as low as 1.2693 so far. Intraday bias is turned back to the downside for 1.2614 resistance turned support now. Decisive break should confirm the completion of consolidation pattern from 1.1946. IN such case, larger down trend should be resuming for a new low below 1.1946. On the upside, break of 1.2977 resistance is now needed to indicate completion of the fall from 1.3047. Otherwise, outlook will remain bearish in case of recovery.

In the bigger picture, fall from 1.7190 is seen as part of the down trend from 2.1161. The rejection from 55 week EMA is maintaining bearishness in the pair. Also, at this point, as long as 1.3444 resistance holds, fall from 1.7190 is still expected to continue. Break of above mentioned 1.2614 support will affirm this bearish case. 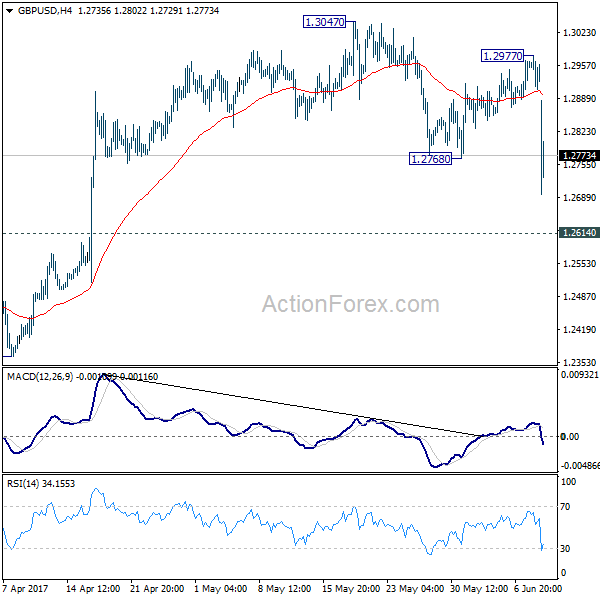 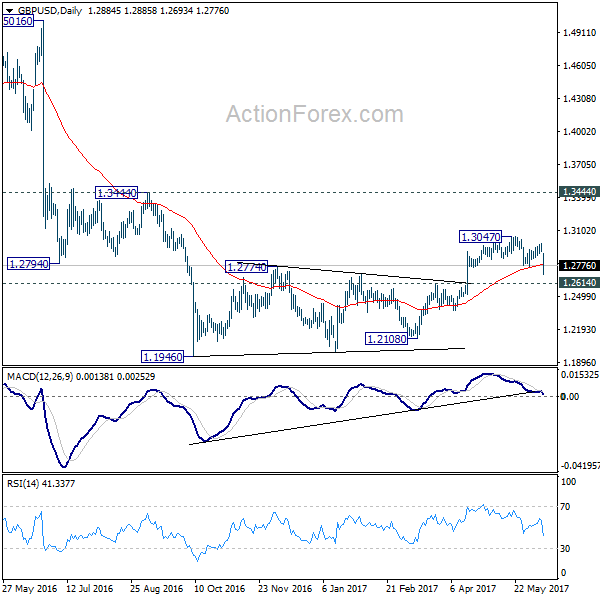