Asian markets trade broadly lower today as traders lighten up positions ahead of the highly anticipated Trump-Xi meeting tomorrow. Yen and Swiss Franc are currently the strongest ones as sentiments turn cautious. Nevertheless, both are contained well above recent lows against other majors currencies for now. Directions in other major currencies are not too clear neither. Overall, trading is rather subdued.

Trump and Xi are scheduled to meet at 0230 GMT on Saturday. It’s believed that some form of agreement is already in place to halt recent escalation in US-China trade war. But nothing is done until it’s done. A Trump-Kim style negotiation breakdown cannot be totally ruled out. In addition, to trade, Eurozone CPI and US PCE inflation would be important to gauge the chance of imminent policy easing by ECB and Fed. Canada GDP is also crucial to solidify BoC’s neutral stance. These data could provide some volatility for the day.

At a news conference, European Commission President Jean-Claude Juncker warned the “difficult” US-China trade relations are “contributing to the slowdown of the global economy”. He’d draw both US and Chinese attention to the “harmful impact this controversial matter is creating.”

BoJ: All policy measures should be considered if baseline scenario changes

In the summary of opinions at June 19-20 BoJ meeting, it’s noted that Japan’s economy is “likely to continue on a moderate expanding trend”. And “year-on-year rate of change in the consumer price index (CPI) is likely to increase gradually toward 2 percent”. Although “downside risks warrant attention”, it’s “appropriate” to continue with “current monetary policy stance”.

However, there was “an increase in uncertainties regarding overseas economies. US-China trade conflicts and threat of no-deal Break has “started to affect Japan’s economy and people’s sentiment”. The schedule consumption tax hike could “exert downward pressure on economic activity and prices.”

It’s argued that it’s important for BoJ to take “some kind of policy responses if some changes emerge in the baseline scenario of the outlook for prices”. And, “all policy measures — including adjustments in short- and long-term interest rates, an acceleration in the pace of expansion in the monetary base, and an increase in the amount of assets to be purchased — should be deliberated when considering additional easing.”

Additionally, it’s also argued that considering growing expectation for easing by Fed and ECB, BoJ “also needs to strengthen monetary easing”. And, “it is necessary to further consider in depth the feasibility of a wide range of additional easing measures, as well as their effects and side effects.”

Looking ahead, Eurozone CPI flash will be the highlight in European session. Any upside surprise there could ease pressure on ECB for imminent easing. Germany will release import prices. Swiss will release KOF economic barometer. UK will release Q1 GDP final and current account balance.

Later in the day, US personal income and spending will be released. Fed’s July meeting is live and a cut is not a done deal. Today’s core PCE inflation, together with next week’s ISMs and NFP, will be crucial for the decision, together with result of G20 meeting. US will also release Chicago PMI. Canada GDP and Business Outlook Survey are equally important for BoC to rule out a rate cut. Canada will also release IPPI and RMPI.

USD/CHF weakens mildly today but stays in range above 0.9695 temporary low. Intraday bias remains neutral for more consolidations. Upside of recovery should be limited by 0.9854 support turned resistance to bring fall resumption. On the downside, break of 0.9695 will resume the fall from 1.0237 to 0.9587 fibonacci level. Nevertheless, break of 0.9854 will indicate short term bottoming and target 1.0014 resistance instead. 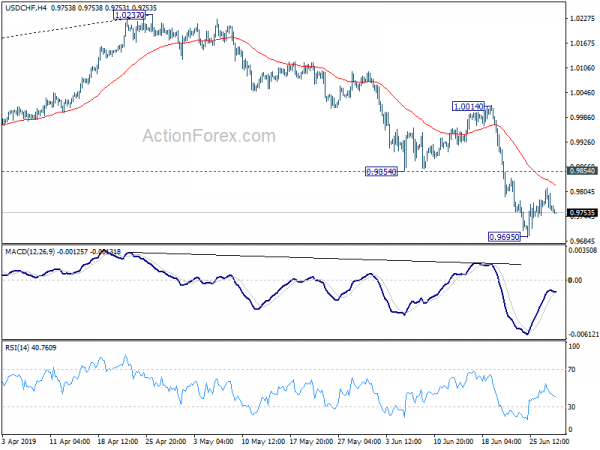 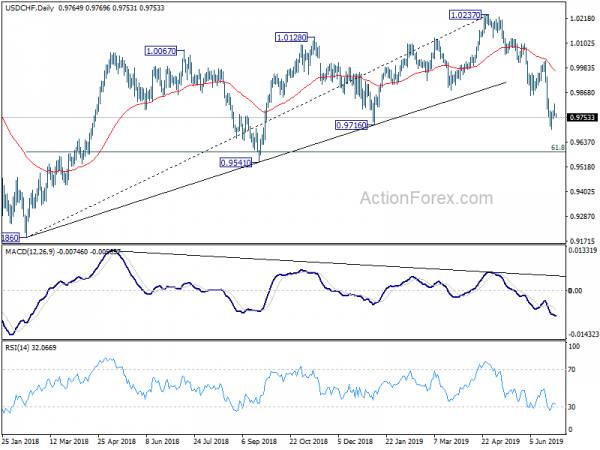