Dollar rose mildly overnight but strength was so far limited. Comments from Fed officials were mixed and provided little guidance to the greenback. Meanwhile, Japanese Yen trades broadly lower on solid risk appetite and recovery in yields. DOW and S&P 500 surged to record close at 21528.99 and 2453.46 respectively. Nikkei followed and gains 0.81% to 20230.41. US 10 year yield recovered by adding 0.033 to 2.190, but it’s still limited below 2.229 resistance. Similarly, dollar index is held below 97.77 resistance. EUR/USD is also staying above 1.1109 support. There is no change in Dollar’s bearish trend yet.

Comments from Chicago Fed President Charles Evans suggested he could lean towards waiting until the of the year to decide whether to raise interest rate again. He noted that "I don’t see why we would not be served to allow more time to wait." He said that the current environment of low inflation "supports very gradual rate hikes and slow preset reductions in our balance sheet". And, "it remains to be seen whether there will be two rate hikes this year, or three, or four or exactly when we start paring back reinvestments of maturing assets." Evans urged Fed to "assure the public that we recognize the new low-inflation environment and that we are not overly conservative central bankers who see our inflation target as a ceiling."

On the other hand, New York Fed President William Dudley was more positive. He didn’t sound much concerned with low inflation. Instead, he noted that the US is "pretty close to full employment. And if labor market continues to tighten further "wages will gradually pick up". And with that "inflation will gradually get back to 2%". Regarding the economy, Dudley also expressed that he is "confident" that the expansion has "quite a long way to go".

UK and EU representatives met in Brussels yesterday for the first formal Brexit negotiation. Agreement was made that talks until October should focus on the three issues of financial settlement, citizens rights and Northern Ireland. Further talks will be held in the weeks of July 17, August 28, September 18 and October 9. UK’s Brexit Minister David Davis said he was "encouraged" by the first talks that "laid solid foundations for future discussions and an ambitious but achievable timetable". On the other hand, EU’s chief negotiation Michel Barnier said that little was achieved other than setting a timetable and a structure for negotiations.

BoE Forbes warned of costs of waiting too long

The hawkish BoE MPC member Kristin Forbes warned that for a period, policy makers have been "underestimating the inflationary pressures". And there’s a "cost to waiting" before the central bank raise interest rates. She noted that "the increase in headline inflation isn’t just a temporary effect of the exchange rate that’s going to go away." And policy makers have to be "very cautious in how these exchange-rate effects will affect these permanent components of inflation." She also said that that "if you wait for wage growth to pick up, you’ve waited too long." Forbes will end her term by the end of this month. BoE has appointed Silvana Tenreyro, an economics professor at the London School of Economics, to replace Forbes.

RBA minutes showed that the central bank was confident that growth will pick up again the the weak Q1. Nonetheless, the board cautioned the developments in labor and housing markets and said they "warranted careful monitoring". In particular, the minutes said that "members observed that low growth in incomes, along with high levels of household debt, appeared to have been constraining growth in household consumption." Overall, the minutes added little to what Governor Philip Lowe said yesterday. Lowe painted an optimistic picture and said that growth over the next couple of years will be "a bit stronger than it has been recently".

USD/JPY’s rally continues today and breaches 111.70 resistance. Intraday bias remains on the upside for near term channel resistance (now at 113.02). Sustained break there will suggest that whole pull back from 118.65 has completed at 108.12 already. In such case, further rise should be seen to 114.36 resistance for confirmation. On the downside, below 110.63 minor support will turn intraday bias neutral. Break of 108.81 will extend the fall from 118.65 through 108.12 low before completion.

In the bigger picture, price actions from 125.85 high are seen as a corrective pattern. It’s uncertain whether it’s completed yet. But in case of another fall, downside should be contained by 61.8% retracement of 75.56 to 125.85 at 94.77 to bring rebound. Overall, rise from 75.56 is still expected to resume later after the correction from 125.85 completes. 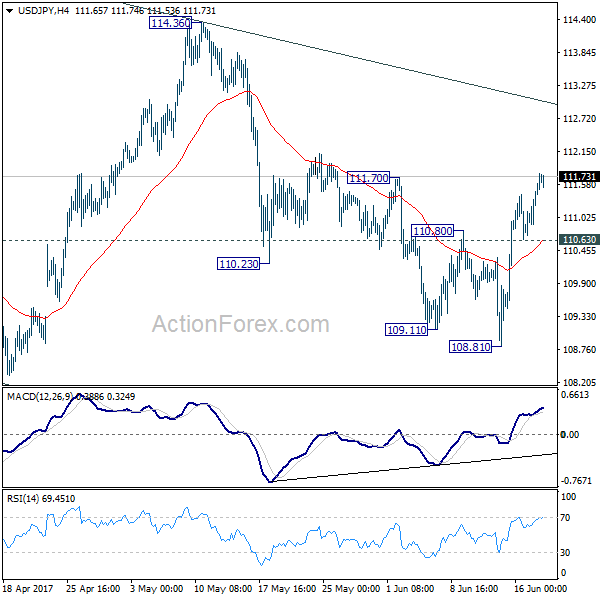 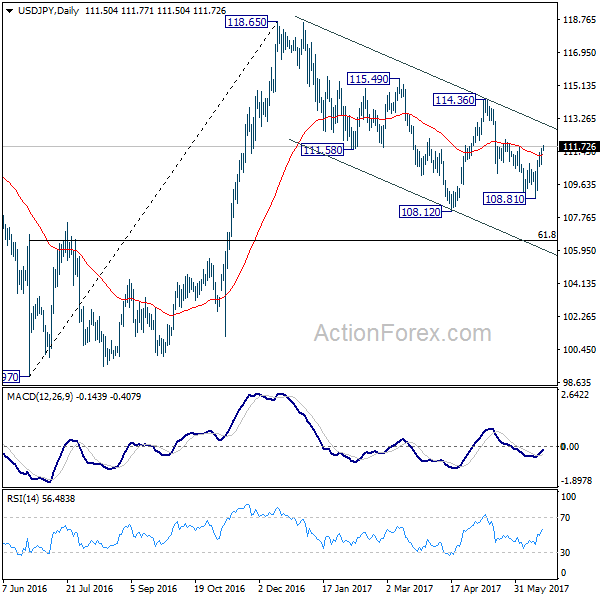