Euro to End Firm as ECB Seen Done with Easing

European majors remain generally firm today. In particular, Euro is supported by the view that ECB has done with policy easing after yesterday’s stimulus package. Such view is supported by rare open criticism on the measures by ECB officials. Commodity currencies are generally softer together with Dollar. Over the week, Sterling will likely end as the strongest one, followed by Euro, Yen is the weakest, followed by Kiwi and then Canadian.

ECB Governing Council member Klass Knot blast the stimulus package announced by the central bank yesterday. He said “this broad package of measures, in particular restarting the asset purchase program, is disproportionate to the present economic conditions, and there are sound reasons to doubt its effectiveness.” He added, “there are increasing signs of scarcity of low-risk assets, distorted pricing in financial markets and excessive risk-seeking behavior in the housing markets,”

Another Governing Council member Robert Holzmann also questioned that the comprehensive package shouldn’t come before the planned policy review. He pointed to inflation target and said “It may be that 2% at the moment is out of reach and 1.5% also signifies stable prices, almost stable prices. So there is no need to … use all the power you have in order to move up to 2% if the cost is too high.”

Released from Eurozone, trade surplus widened to EUR 19.0B in July, above expectation of EUR 17.5B.

New Zealand BusinessNZ manufacturing index rose 0.3 to 48.4 in August, indicating slightly slowing pace of contraction. However, the details are not too encouraging. The sub-index of new orders (45.6) dived further into decline, at its lowest point in over ten years since May 2009.  Production (49.7) fell from expansion to decline. Employment (49.3) remains in contraction after some recovery.

BNZ Senior Economist, Doug Steel said that “disconcertingly, the PMI adds to a building case over recent times that there has been a palpable softening in demand – at least for manufactured goods”.

No change in EUR/USD’s outlook as consolidation from 1.0926 is extending. Further rise could be seen but upside should be limited below 1.1164 resistance to bring fall resumption. On the downside, break of 1.0926 will resume lager down trend from 1.2555 for 1.0813 fibonacci level next. However, firm break of 1.1164 will an early indication of larger reversal and target 1.1249 resistance first. 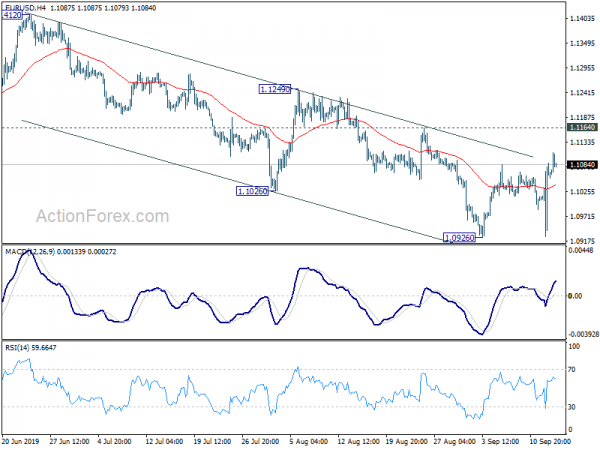 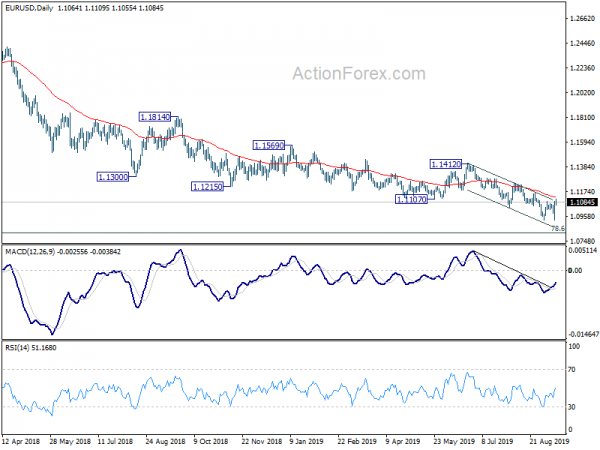