Dollar Regains Control With Job Data, But Yen Much Stronger

Dollar regains some control and stays firm after ADP job report. Though, it’s outshone clearly by Yen which is lifted by risk aversion. New Zealand Dollar comes in as second strongest as it’s paring some of recent losses. On the other hand, Swiss Franc drops notably after poor CPI data, as well as SNB’s pledge to maintain negative rates. Sterling is also week as markets are not quite buying into Prime Minister Boris Johnson’s new Brexit proposal.

Technically, USD/CHF staged a U-turn today and breaks yesterday’s high of 1.0016. Recent rebound from 0.9695 is resuming for 1.0113 fibonacci level next. AUD/USD is still pressing 0.6677 support despite another breach today. Decisive break there will confirm resumption of medium term down trend. USD/CAD recovers after breaching 1.3209 minor support. Further rise is still in favor through 1.3310 resistance eventually.

“The job market has shown signs of a slowdown,” said Ahu Yildirmaz, vice president and co-head of the ADP Research Institute. “The average monthly job growth for the past three months is 145,000, down from 214,000 for the same time period last year.” Mark Zandi, chief economist of Moody’s Analytics, said, “Businesses have turned more cautious in their hiring. Small businesses have become especially hesitant. If businesses pull back any further, unemployment will begin to rise.”

UK Prime Minister Boris Johnson confirmed in the Conservatives’ annual conference that he’s tabled his “fair and reasonable compromise” to the EU. And warned that if EU doesn’t accept it, the alternative is no-deal Brexit. He said, “We are tabling what I believe are constructive and reasonable proposals which provide a compromise for both sides. Let us be in no doubt that the alternative is no deal.”

Johnson noted that the proposals involve no checks at or near the Irish border. And, “By a process of renewable democratic consent by the executive and assembly of Northern Ireland. We will go further and protect the existing regulatory arrangements for farmers and other businesses on both sides of the border.” No further details were given.

UK PMI construction dropped to 43.3, remained mired in a downturn

UK PMI Construction dropped to 43.3 in September, down from 45.0 and missed expectation of 45.0. That’s the second worst reading since April 2009. Markit noted that commercial activity remained the weakest-performing category. There was the second quickest fall in new orders for over a decade. And employment cut to greatest extent since December 2010.

Joe Hayes, Economist at IHS Markit: “The UK construction sector remained mired in a downturn at the end of the third quarter… Activity is being pulled down at its second-fastest clip for over a decade as firms are buffeted by client hesitancy, heightened Brexit uncertainty and a weak outlook for the UK economy. The commercial sector was a notable casualty in September, with building activity here falling at the fastest rate since April 2009, highlighting the damaging effects of project delays and belt-tightening.

He also pledged that the government would be “able to do everything that is necessary” if a crisis emerges like that in 2008/2009. Though, he didn’t see such a scenario.

Recent data suggested that slowdown in the economy continued in Q3. Germany should have been in recession already after two quarters of GDP contraction since Q2.

SNB Board member Andrea Maechler said that “for Switzerland, the negative interest is absolutely needed and essential for us.” In particular expansive policy is critical to counter uncertainties, including Brexit, US-China trade tension and geopolitical tensions with Iran.

She added that the central bank is willing to further intervene in the forex markets. Also, she warned “there might be a scenario in which the world stays longer than expected in this environment of very low rates.”

FSO also said the decrease of 0.1% compared with the previous month can be explained by several factors including falling prices for foreign package holidays and petrol. The prices of airfares and hotel accommodation also declined. In contrast, prices for clothing and heating oil increased.

USD/CHF drew strong support from 4 hour 55 MACD and rebounded. Break of 1.0016 suggests resumption of whole rise from 0.9659 low. Intraday bias is back on the upside for 78.6% retracement of 1.0237 to 0.9659 at 1.0113 next. On the downside, break of 0.9843 support is needed to indicate short term reversal. Otherwise, near term outlook will remain cautiously bullish in case of retreat. 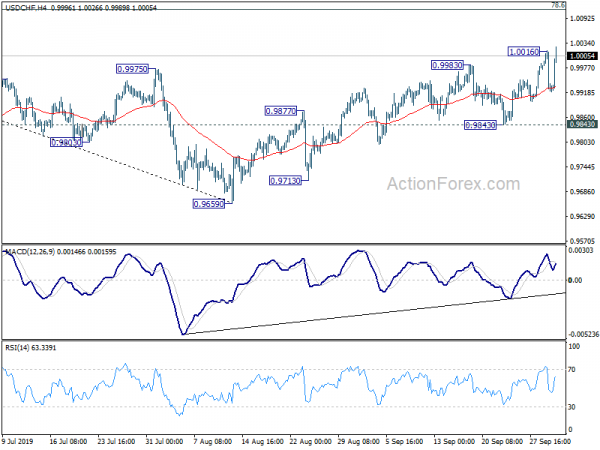 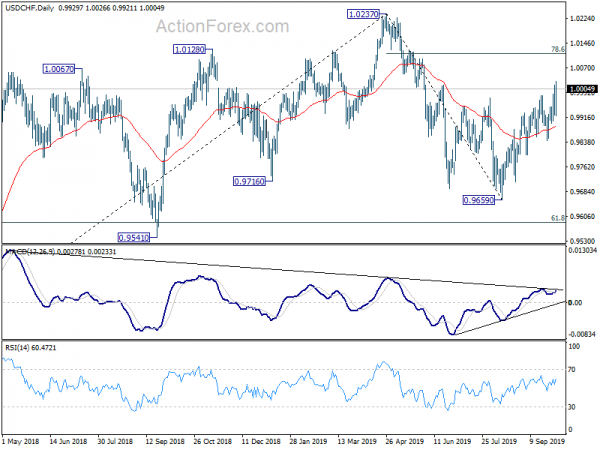