Technically, current decline in Dollar is seen as nothing more than part of near term consolidations. New highs against other major currencies are expected at a later stage. We’d maintain this view at least before a break of 1.0981 minor resistance in EUR/USD, 1.2129 minor resistance in GBP/USD and 0.9649 minor support in USD/CHF.

Gold’s break of 55 day EMA now suggests that fall from 1703.28 has completed at 1451.16. Notable support was seen from 55 week EMA and above 1445.59 structural level. Nevertheless, such decline is just seen as the third leg of a medium term corrective pattern, to the whole rise from 1160.17. Therefore, while further rebound could be seen, upside should be limited by 1703.28 high. Another falling leg is expected at a later stage, to complete a three-wave corrective pattern. 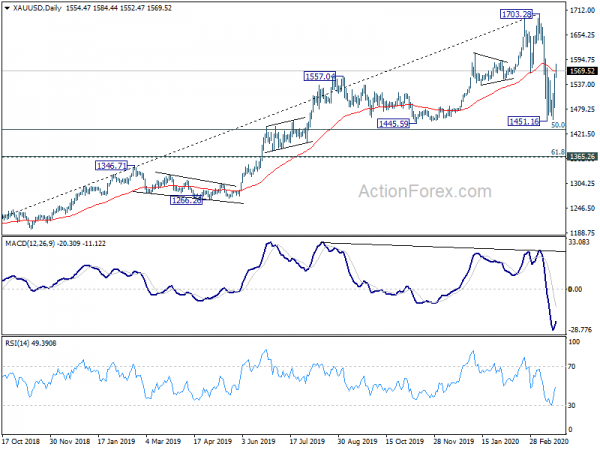 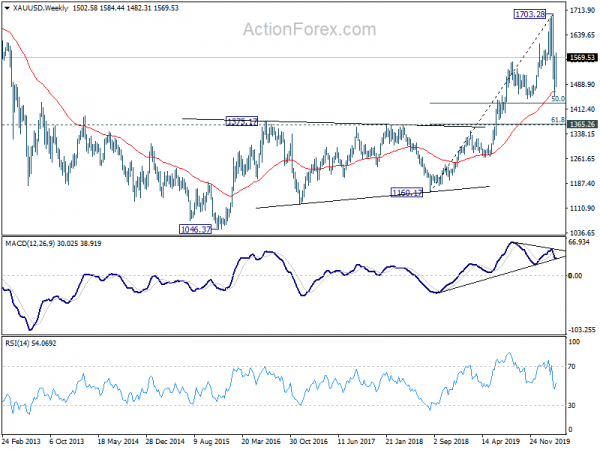 Joe Hayes, Economist at IHS Markit said: ” Latest PMI data show that the Japanese economy slipped into an aggressive downturn in March that was primarily led by the service sector… In contrast to other parts of Asia, the US and Europe, Japan (at the time of writing) has not issued a public lockdown, while there are reports that footfall in places such as Tokyo remains high. If the outbreak were to accelerate, the economic damage could far exceed what we’ve seen so far, particularly if The Olympic Games are postponed”.

Japan Finance Minister Taro Aso warned that the Financial Services Agency will strengthen monitoring against improper trading activity at the current time of heightened market volatility. In particular, the FSA will with with securities watchdog and stock exchanges to monitor  fraudulent activities in market operations.

He also made a rare comment regarding Dollar’s strength. Aso said, “Everyone is buying dollars. That’s leading to declines in other currencies. Stocks and bond prices are both falling, which is something that has not happened before.” “It’s probably investors’ anxiety” over the coronavirus pandemic, he added.

CBA Chief Economist, Michael Blythe said: “The sharp deterioration in PMI readings during March underline the increasing impact of the coronavirus on the Australian economy. The services sector is being hit hard by the cancellation of events, general fears about social interaction and a very sharp decline in offshore demand as travel restrictions bite.

“The manufacturing sector is faring a little better. But the leading indicators are flashing warning signs. The deterioration in supplier delivery times is accelerating, highlighting the disruption to supply chains. And the lower Aussie dollar is pushing input prices up at a rapid rate”.

PMIs from Eurozone, UK and US will be the major focuses today, showing how deep the impact of coronavirus pandemic is. UK will also release CBI industrial orders expectations. US will release new home sales.

EUR/USD recovers mildly as consolidation from 1.0635 temporary low extends. Further rise cannot be ruled out but upside should be limited by 1.0981 resistance to bring fall resumption. On the downside, break of 1.0635 will extend larger down trend for 1.0397 projection target next. However, sustained break of 1.0981 will indicate stronger rebound is underway back towards 1.1496 key resistance. 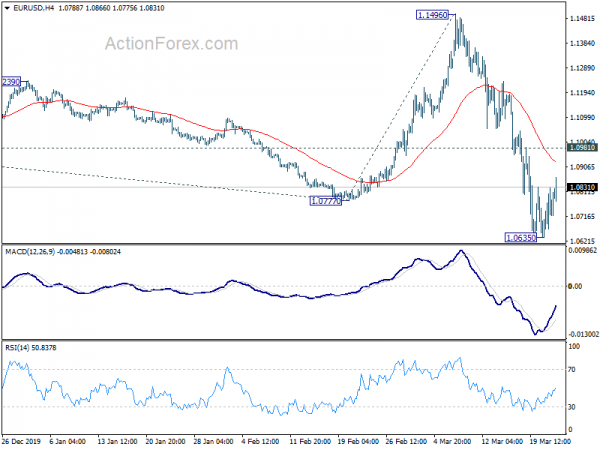 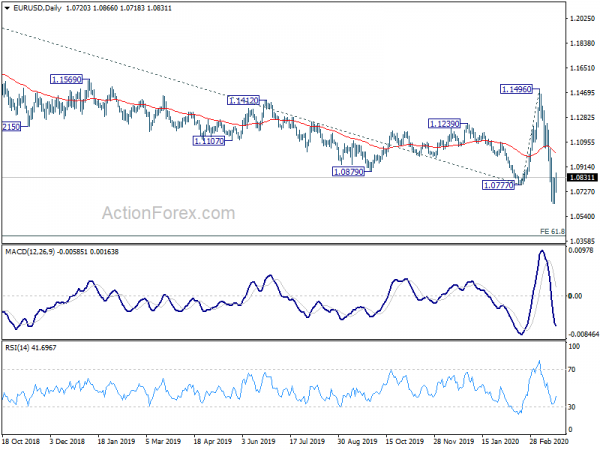